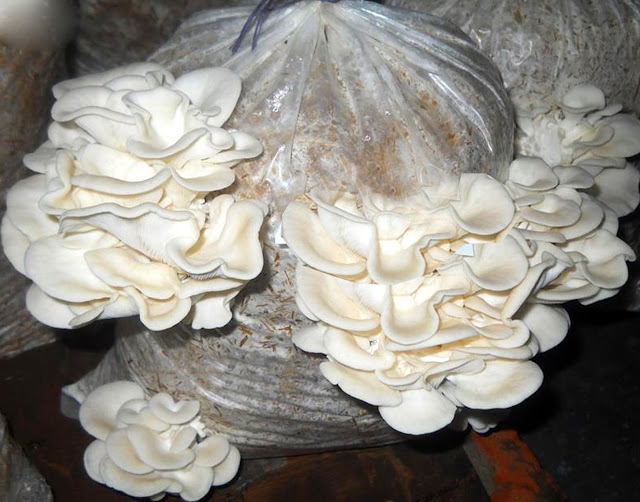 The growth and cultivation of ‘Oyster (Dhingri) Mushroom, botanically referred to as ‘Pleurotus ostreatus’ is all set to strengthen the economy of the farmers of the tribal region of Lahaul &Spiti of Himachal Pradesh.
Spiti, the abode of lamas and also an attraction for the tourists from around the Globe for its age old Buddhists monasteries, its scenic splendour, snow covered peaks, is now ready to ‘make its mark’ in production and export of the Oyster Mushroom to other parts of the country.

Besides, growing peas, the farmers of Spiti have stepped in for added economy avenue says Kalzag Ladde, of Chichim village in Spiti, who is growing the spatula shaped mushroom since 2015 but now with added efforts of the Horticulture department, the subject matter specialists are educating people about the technique to grow this mushroom. Ladde is producing more than 150 kilograms of oyster mushroom and is supplying the same to the local hoteliers and Home Stay’s in Kaza at a rate of Rs.250 to Rs.300 per kg, to be served as a notable cuisine on a platter.
As of now 50 farmers have been given training for growing the oyster mushroom and have been distributed spawned bags of the ‘Dhingri’ mushroom to be incubated under room temperature.

Source of employment for many local Women:

Once produced in abundance, the mushroom can be utilised for pickles, mushroom powder, for medicines etc, and also providing direct source of employment to the women folk at their doorsteps.The oyster mushroom is one of the most suitable fungal organisms for producing protein rich food from various agro-wastes without composting having medicinal value as well.

It has Medicinal usage especially for sugar patients:

It is quite rich in vitamin C and B complex, with protein contents varying between 1.6 to 2.5%. It has most of the mineral salts required by the human body such as potassium, sodium, phosphorus, iron and calcium. It also has antibiotic properties and also reduces the bad cholesterol and is suitable for sugar patients as well.
The Oyster mushroom is grown in subtropical mountain regions with temperature ranging from 10 to 24 degree centigrade and relative humidity between 55-75%, for a period of 6 to 8 months in a year. The clean dry paddy straw is soaked in water for 18 hours or so and mixed with a bottle of master spawn along with horsegram powder. The mixture is filled into polyethylene bags and kept at room temperature. The compact mass is watered regularly until the mushroom start growing all over.