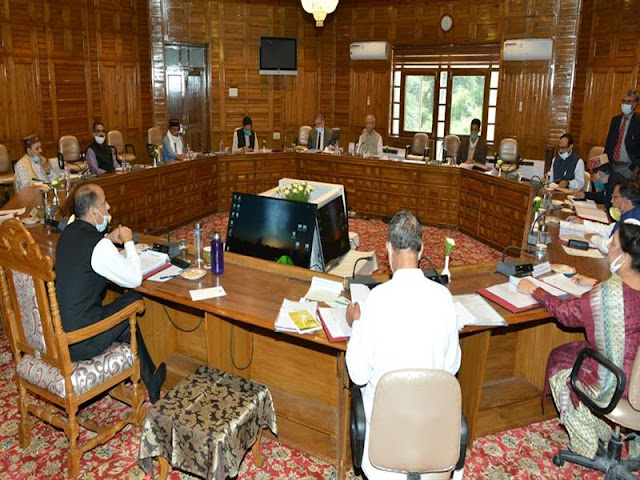 The State Cabinet in its meeting held here today under the chairmanship of Chief Minister Jai Ram Thakur Ji expressed grief over the untimely death of former MLA from Theog assembly constituency Rakesh Verma and observed two minutes silence as a mark of respect to the departed soul.

Recommendations of the 15th Central Finance Commission to be implemented:

Amongst other items discussed, it was decided to implement the recommendations of 15th Central Finance Commission in the State, under which out of the total grants received from it, 70 percent would be provided to Gram Panchyats, 15 percent to Panchayat Samitis and 15 percent would be allocated to Zila Parishads for undertaking various developmental works.

Schools will only Charge the tuition fee:

In view of the lockdown due to outbreak of Novel Corona Virus in the country as well as in the State, the schools would be allowed to charge only tuition fee.
The Cabinet decided to upgrade Veterinary Hospital at Nagrota Bagwan in Kangra district to Zonal Veterinary Hospital alongwith creation and filling up of seven posts of different categories to man this hospital.

Scheme for Rehabilitation of Stray Cattle will be started :

It gave its nod to start scheme for ‘Rehabilitation of Stray Cattle’ in Himachal Pradesh to solve the problems of stray cattle, encourage individuals and organizations to adopt stray cattle, provide assistance for running of cow sanctuaries and gau sadans in the State.  In the initial phase, it was decided to provide Rs. 500 per cow for cows in gausadans/gaushalas and cow sanctuaries. The Animal Husbandry Department was advised to complete tagging under Information Network for Animal Productivity and Health (INAPH) Scheme as per Government of India’s guidelines at the earliest.

3 fast track courts to be established:

The Cabinet also decided to establish three Fast Track Special Courts at Shimla, Rampur for Kinnaur district and at Nahan, district Sirmaur to deal with the rape/POCSO cases for a period of one year.
LOC system to be abolished for 1st july 2020:
In order to achieve transparency, accuracy and efficiency in the
payment and accounting process for works transactions and to eliminate delays in pairing of payment and receipt instruments, the Cabinet gave its nod to complete shifting of works transactions of Jal Shakti Department and Public Works Department to Treasury Mode by abolishing the LOC system from 1st July, 2020.

The Cabinet gave its consent to extend the period of four Special Land Acquisition Units (SLAUs) for further period of one year with effect from 1.3.2020 to 28.2.2021 alongwith permission to continue with staff already engaged. These include SLAUs, Bilaspur, Pandoh-I, Pandoh-II and Shahpur for acquisition of land for construction of four laning projects of Kiratpur-Bilaspur-Nerchowk-Pandoh, Pandoh-Takoli, Takoli-Kullu-Manali and Pathankot-Chakki-Mandi respectively.It also gave its approval for extension of Special Land Acquisition Unit (SLAU), Nalagarh for further one year from 1.1.2020 to 31.12.2020 for acquiring land for four laning of NH-21A Baddi-Nalagarh-Swarghat.

Cabinet decided to transfer land in favour of Ministry of Defence, at Dehra (Kangra Distt.)

The Cabinet decided to transfer land in favour of Ministry of Defence, Government of India for establishment of ECHS Polyclinic and ESM, CSD Canteen at Dehra Gopipur in district Kangra free of cost to facilitate the ex-servicemen and army personnel of the State.
The Cabinet decided to levy transfer fee at the time of issue of permits under L-19 A licenses from local distilaries (D-2) located within the State   for procurement of all kinds of spirits i.e. Ethyl Alcohol, ethanol, rectified spirits, ENA and absolute alcohol used in  manufacture of sanitizers at the rate of Rs. 4.50 per bulk litre. This would give an additional revenue of about Rs. five crore to the State exchequer.

It also gave its consent to levy license fee for Bar licenses L-3,L-4, L-5, L-4 and L-5 and L-4A and L-5A and Minimum Guarantee Quota on pro-rata basis for the year 2020-21.
The Cabinet also authorized all the District Magistrates of the State under the proviso of Sub-Section (4) of Section 144 of the Code of Criminal Procedure, 1973 to extend the order issued by them under Section 144(1) of the Code upto 30th June, 2020.

The Cabinet decided to amend the ‘Mukhya Mantri Swavlamban Yojna-2019’ to make it more lucrative. Now units sanctioned under this scheme should come into commercial production within one year from the date of disbursement of first installment of loan by the bank under the Scheme for both manufacturing and service enterprises. Besides, in case such units have been set up by widows who are bonafide Himachali and having age upto 45 years, amount of eligible subsidy has been enhanced from 30 percent to 35 percent.

B.Sc. nursing seats to be  increased in SLBS Degree college and hospital in Mandi:

It gave its nod to provide NOC in favour of Shri Lal Bahadur Shastri Government Degree College and Hospital, Ner Chowk district Mandi for increasing B.Sc. nursing seats from existing 40 to 60 seatsThe Cabinet gave its approval to create and fill up one post of Assistant Professor in Radiology and Gastroenterology in IGMC Shimla and one post each of Assistant Professor Anatomy and Pediatrics Department in Dr. Rajendra Prasad Government Medical College, Tanda.