CM launches One Nation One Ration Card Scheme for State 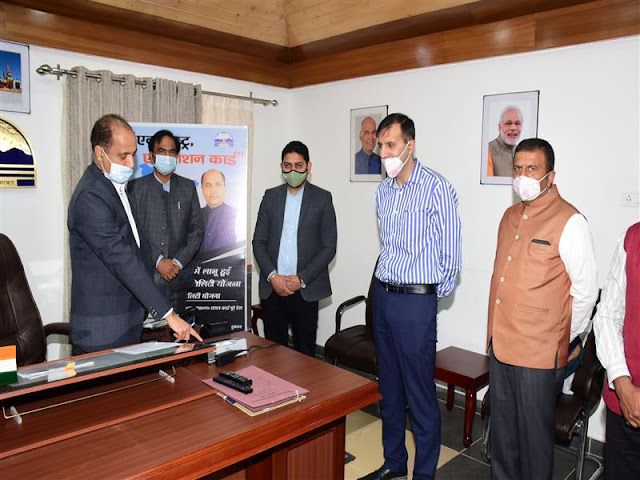 Chief Minister Jai Ram Thakur ji today launched 'One Nation One Ration' card scheme under the Interstate Portability Scheme of Department of Food, Civil Supplies and Consumer Affairs for all migrant labourers.
Chief Minister said that this would help the consumers to take ration from any fair price shop in the country. He said that this would be done through National Portability Scheme of Ration Card. He said that it would benefit about 67 crore people of the country and lakhs of people of the State.


Jai Ram Thakur Ji  said that Centre Government has decided to provide free food grain for two months to about eight crore migrant labourers of the country. Those labourers who do not have ration card would also be provided free five kilogram wheat or rice per person and one kilogram pulse per month, Chief Minister said that 2864.46 tonne food grains have been allocated to Himachal Pradesh under this scheme which would go a long way in facilitating the State Government to provide this ration to the targeted groups at the earliest.

Chief Minister Jai Ram Thakur said that under Mukhya Mantri Swavlamban Yojna investment subsidy at 25 percent was being provided for projects having investment upto Rs. 60 lakh for youth and 30 percent for projects having investments upto Rs. 60 lakh for women entrepreneurs. He said that five percent interest subsidy would also be provided for a period of three years.
Jai Ram Thakur Ji  was presiding over a meeting with various Industrial Associations regarding roadmap for recovery of industrial sector in the wake of corona pandemic here today.
He said that the State Government has also taken up the matter with the Union Government for relaxation of the condition under Pradhan Mantri Garib Kalyan Yojna under which the benefit of this scheme could be availed by those enterprises where 90 percent or more employees are drawing wages less than Rs. 15,000/- per month, besides payment of wages of lockdown period from ESIC funds.

Jai Ram Thakur Ji said that the State Government has also deferred demand charges of power by three months and power bill payment has been deferred without late fee by HPSEB. He said that last date for filling acknowledgement of declaration under HP (Legacy Case Resolution) Scheme 2020 has been extended to 30th September, 2020. He said that State Government has taken several steps to facilitate operations of essential goods industries throughout the lockdown period and other industries during the second period.

Chief Minister said that the industrialists of the State had provided all possible help to the State by making contributions towards the PM CARES and HP SDMA COVID-19 State Disaster Response Fund or even by providing free masks and food to the needy.  He said that no one had anticipated of this situation but by collective efforts we were fighting this pandemic successfully. He said that it was due to the farsighted and strong leadership of Prime Minister Narendra Modi that COVID-19 cases in our country were less than most of the developed countries.  He said that challenges also provide us opportunities and we should come forward to accept these challenges and convert them into opportunities.

Atamnirbhar Bharat’ package is going to give the required impetus to the economy:

Jai Ram Thakur J said that the ‘Atamnirbhar Bharat’ package announced by the Prime Minister was the biggest economic package of independent India. He said that this package envisages building a self sufficient and self reliant India post COVID.  He said that about 300 units in the country were manufacturing PPE kits in the country in a short period of two months whereas once it was totally dependent on China.  He said this was the best example of challenge converted into opportunity.
Chief Minister said that MSME sector has been badly affected due to COVID-19 pandemic. He said that about 95 percent of the industries in the State fall under MSME categories. He said that steps should be taken to derive maximum benefits of this package to revive these units. He assured that all the issues raised by the industrialists would be considered sympathetically.

Chief Minister said that industry was playing a major role in development and progress of the State. He said that Government was providing various incentives to Medium, Small and Micro Enterprises (MSME) under Industrial Policy 2019, such as rebate of 50 percent, 60 percent and 70 percent of rate/premium on land cost, stamp duty and registration fee at the rate of 50 percent, 30 percent and 10 percent of applicable rates in category ‘A’, ‘B’ and ‘C’ respectively, 100 percent exemption on CLU besides 50 percent subsidy of maximum Rs. 20 thousand towards the cost of preparation of Detailed Project Report and obtaining certification.
Jai Ram Thakur Ji said that an economic incentive of Rs. 50 thousand crores under Rs. 20 lakh crore economic package was offered by the Central Government to ensure the availability of funds (Liquidity) required for medium, small and micro industries (MSME). He said that this would encourage those wanting to set up new MSME units and those who are already incurring losses, due to certain reasons, would also get the facility to take an additional loan with this.

Chief Minister said that there was also a provision to provide an amount of Rs. 3 lakh crores for giving loans to MSME, without any collateral security and this loan would be given for a period of 4 years and 100 percent guarantee would be given by Government. He said that up to one year exemption would be provided for repayment of the principal amount of these loans.  He expressed hope that with these incentives, the MSME in the State would get boost in a big way.

Jai Ram Thakur Ji said that payment of 12 percent of employer and 12 percent employee contributions was being made into EPF accounts of eligible establishments under Pradhan Mantri Garib Kalyan Yojna. He said that earlier this incentive was provisioned for the months of March, April and May,2020 which has now been  extended upto August, 2020.
Industries Minister Bikram Singh Thakur said that the State Government was committed to provide all possible assistance to the industry for its proper revival which got badly affected due to the COVID-19 pandemic. He said the main objective of this meeting was  to derive maximum benefits of the  economic package of Rs. 20 lakh crore announced by the Union Government.