Big employment generation projects must be monitored on a daily basis :CM 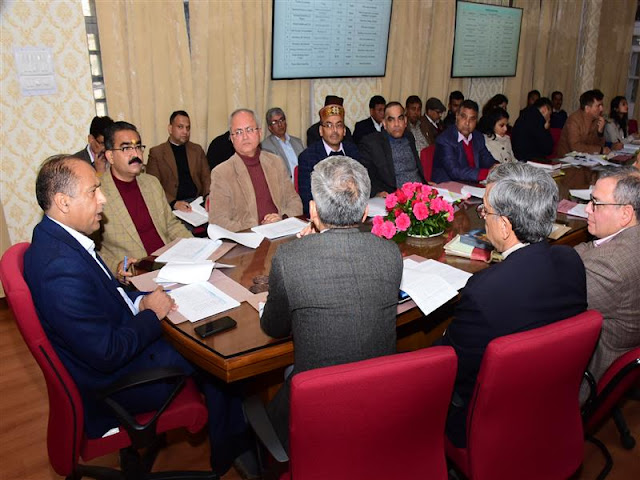 All the departments should constantly review the progress in already grounded MoUs so that all the projects could be completed within proposed time lines. This was stated by Chief Minister Jai Ram Thakur while presiding over the review meeting of first Ground Breaking Ceremony of ‘Rising Himachal Global Investors Meet', held here today.

Proactive approach and regular followup is a mandate:CM

Chief Minister said that nodal officers must be appointed for each major project so that the work for according to various required approvals for the projects could be expedited. He said that the officers should ensure regular follow up and adopt proactive approach for ensuring that pace of approval was speeded up and projects see the light of the day at the earliest.
Jai Ram Thakur said that instead of waiting for any query from the entrepreneur's side, they should reach out to the investors and look into their grievances. He said that this would not only expedite the progress in the projects but also instill faith in the entrepreneurs, that Government was serious about their projects. He said that the investors must get a feeling that the state government was committed for the success of their projects and their investment in the State was safe.

Projects seeking permission of section 118 must be prioritized:CM

Chief Minister said that all the cases regarding permission of Section 118 must be taken up at the earliest and entrepreneurs should be facilitated by giving them time bound clearance. He said that the administrative secretaries and heads of departments should also keep close liaison with the nodal officers to ensure actual status of the projects. He said that this would not only ensure early completion of all formalities but also the projects would be grounded without any delay.

Big employment generation projects must be monitored on a daily basis: CM

Jai Ram Thakur said that progress in the MoUs of which ground breaking was performed must be monitored at day to day basis by Heads of Departments and fortnightly at Secretary Level. He said that greater emphasis must be laid on bigger projects with greater investment and employment potential. He said that for this a project specific roadmap must be prepared so that project could take off at the earliest.

regular follow-ups must be done with potential investors:CM

Chief Minister also directed the officers to vigorously follow up with the potential investors who have signed MoUs and also work with missionary zeal to persuade the MoUs signatories for implementation of their investment projects at the earliest.
It was informed in the meeting that out of the total 83 MoUs grounded in first ground breaking ceremony almost all the potential entrepreneurs were keen to expedite their works.
Industries Minister Bikram Singh Thakur felt the need for adopting proactive approach to expedite the work on grounded MoUs only then desired results could be achieved. He also stressed on greater coordination between various departments for ensuring tangible results.