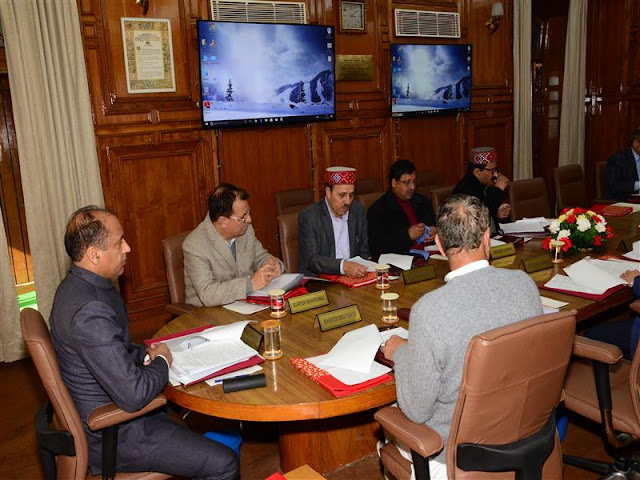 The State Cabinet in its meeting held here today under the chairmanship of Chief Minister Jai Ram Thakur gave its approval to Excise Policy for the year 2020-21  which envisages collection of Rs. 1840 crore revenue during the year 2020-21 which is Rs. 215 crore higher than the financial year 2019-20 thereby registering an increase of 13 percent.

It gave its approval for renewal of the Retail Excise Vends in the State for the year 2020-21 with an objective to gain adequate enhancement in government revenue, reduction in the price of liquor and to curb its smuggling from the neighbouring States. The new Excise Policy also allows 30 percent of the Country Liquor quota for the liquor manufacturers/bottlers to be supplied to the retail licensees.  The balance 70 percent quota can be lifted by the retail licensees from the suppliers of their choice.

The new policy also envisages taking FDR/Bank Guarantee from the retail licensees as security in lieu of security in  a shape of property in order to secure the revenue of the government. From the next financial year all the imported liquor in the State will be supplied by public custom bonded ware house located in the State.  In addition to this, policy also extended operational timings of the bars in all star related hotels and bars in specified important tourist areas from 12 noon to 2 am past midnight.

It also gave approval for capacity expansion of Distillery from 45 KL per day to 85 KL per day in favour of M/s Premier Alcobev Private Ltd., Sansarpur Terrace in Kangra district. The State would earn an additional excise revenue of Rs. 18 to 20 crore per annum.
Cabinet gave its nod to constitute State High-level committee :

The Cabinet gave its approval to constitute a State High level Committee under the Chairmanship of Chief Minister, a State level Coordination Committee under the chairmanship of Chief Secretary and District level Coordination Committees led by concerned Deputy Commissioners to celebrate the Golden Jubilee Year of conferment of Statehood to Himachal Pradesh and for celebrating Golden  Jubilee of Statehood Day on 25th January, 2021. These Committees would ensure celebrations of Golden Jubilee year of Statehood to Himachal Pradesh in a befitting manner and functions will be held from village level to State level.

The Cabinet gave its nod to fill up 23 posts of Junior Office Assistant (IT) in Labour and Employment Department on contract basis and continue the services of 173 Data Entry Operators in the Department till   the posts are not filled up for which requisition has been placed with H.P. Staff Selection Commission.   It decided to fill up two posts of Assistant Professor in Dr. Rajendra Prasad Medical College, Tanda, district Kangra in the department of General Medicine and Department of Obstetrics and Gynaecology through direct recruitment by HP State Public Service Commission.

The Cabinet gave approval to open Primary Health Centre at Maranda in Kangra district along with creation of various posts to manage this institution.
It also gave its approval to create new Elementary Education Block Office at Bagsiad by dividing Elementary Education Block Chachiot -1 and Siraj-1 to facilitate the students and people of the area.
The Cabinet also approved  the H.P. (Legacy Cases Resolution ) Scheme Rules, 2020 which will pave the way for settlement of old pending VAT cases and VAT arrears.