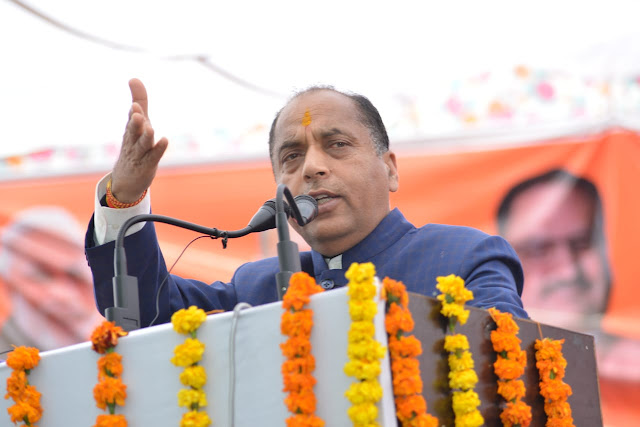 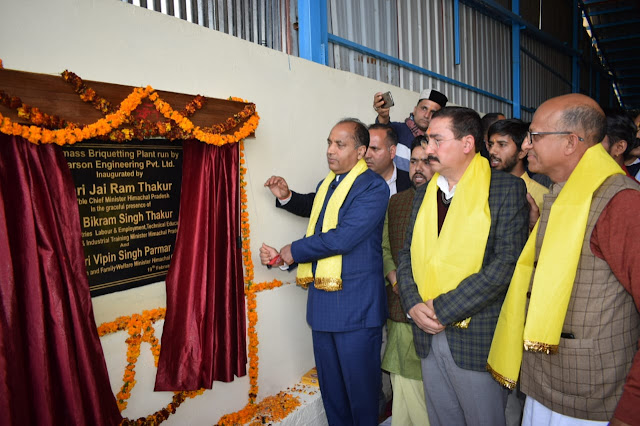 Jai Ram Thakur said that during the first phase of his winter sojourn he had laid foundation stones and inaugurated developmental projects worth Rs. 165 crore in three Vidhan Sabha areas viz. Baijnath, Kangra and Indora. He said that thus foundation stones and inaugurations of about Rs. 350 crore have been done by him in five assembly constituencies of Kangra district.

We are committed towards the overall development of the state:

Chief Minister was addressing a public meeting at Dhaliara in Dehra area of Kangra district todayJai Ram Thakur said that the present state government was ensuring that the winter sojourn of Kangra district was not just a custom for political gains, but the Government was actually concerned about the development of the biggest district of the state. He said that laying foundation stones and dedicating developmental projects worth about Rs 350 crore in five days in five different assembly constituencies of the district speaks of the priority the state government was giving for development of the district. He said that this was the befitting reply to those who were questioning the intentions of the state government. He said that Public Works and Irrigation projects worth crores of rupees were under implementation in Dehra Vidhan Sabha area.

Construction of Central university to be started soon:

Chief Minister said that work on construction of Central University would be started at the earliest and he would again take up the matter in this regard with the Union Government. He said that Rs 6 crore has been sanctioned for development of Industrial area Chinour which would benefit nine panchayats of the area. He said that all possible help would be provided to make Degree College Dhalariya a Model college to facilitate the students. He announced that post of doctors in Civil Hospital Dhalariya would be increased from 9 to 14 and digital X-Ray would be provided in the hospital. He announced Rs 1.50 crore for construction of combined office building at Haripur and Rs. one crore for Nagar Parishad Building, Dehra.

PM Modi Ji has displayed his affection for Himachal more then often:

Jai Ram Thakur said that the people of the state were thankful to the benevolence and affection of Prime Minister Narendra Modi, who considers Himachal Pradesh as his second home. He said that it was due to his affection for the state, that financial assistance in form of developmental projects worth crores of rupees were sanctioned for the state. He said that Prime Minister, during the two years tenure of the present state government, has visited the state thrice and would soon be coming to dedicate the Atal Tunnel at Rohtang on its completion during the month of July or August this year.

bye-elections results a validation of our work:

Chief Minister said that the present state government believed in delivering goods instead of making tall claims. He said that the people of the state gave their full support to the government and ensured the landslide victory of the BJP candidates in the Lok Sabha Elections, by winning all four seats with a record margin by maintaining lead in all the 68 assembly constituencies.  He said that the results of bye elections to the two seats of Vidhan Sabha silenced the political opponents as the Congress even lost its security in Dharamshala bye elections. 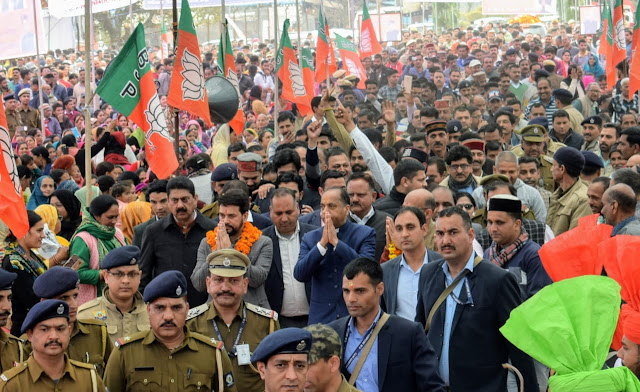 Jai Ram Thakur said that several welfare and developmental oriented schemes were being implemented in the state which were bound to make the lives of the people of the state more comfortable and happy. He said that Jan Manch programme launched by the state government has been appreciated even by the political opponents as this programme has ensured redressal of public grievances nearer to their homes. He said that the Union Government had launched Ayushmann Bharat Yojna for the people of the Country for providing insurance health cover of Rs 5 lakh. He said that as many as 62 crore people had been covered under this scheme, which was ensuring that the poor patients were not deprived of specialised health care facilities due to want of money.
Chief Minister said that the Union Government has sanctioned developmental projects worth Rs. 10,500 crore for the state which would accelerate pace of development. He said that abrogation of Article 370 from Jammu and Kashmir, abolishing Triple Talaq and paving the way for construction of temple of Lord Sri Ram were possible due to the strong leadership of Prime Minister Narendra Modi.