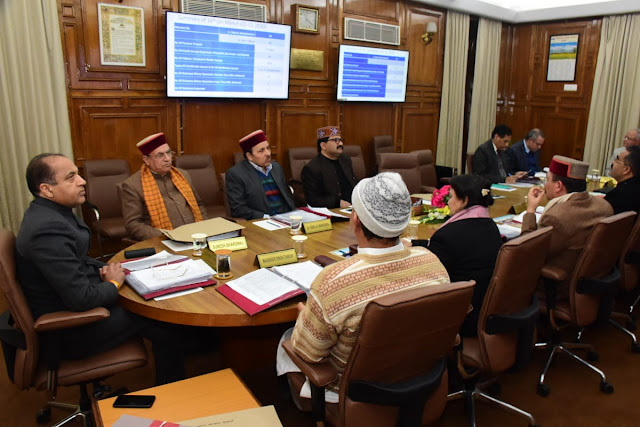 The State Cabinet meeting was held here today under the Chairmanship of Chief Minister Jai Ram Thakur Ji. Below are the highlights of the meeting

Hundreds of posts to be filled in education :

Cabinet gave its approval to fill up 819 posts of various categories in Elementary Education Department which include 532 JBT, 35 Language Teachers, 133 Shastries, 104 TGT (Arts), 8 TGT (Non-Medical) and 7 TGT (Medical) on contract basis to ensure availability of teachers in educational institutions to facilitate the students.

It also approved the recruitment of 1578 para workers, which include 417 Para Pump Operators, 287 Para Fitters and 874 Multipurpose Workers for 394 new drinking water/ irrigation schemes of the Irrigation and Public Health Department through Departmental Para Worker Policy.

16 posts of JT in Horticulture:

It also gave its nod to create and fill up four posts of Chowkidar-cum- Peon and four posts of Sweeper-cum-Peon in Alternative Disputes Resolution Centres at Bilaspur, Hamirpur, Kinnaur at Reckong Peo and Sirmaur at Nahan.

Schools to be upgraded and new courses introduced:

It gave its consent for a pilot project for modification in working of State Reservoirs to bring uniformity in the prices of fish within a reservoir, make fish of the State reservoirs a brand and to increase income and socio-economic status of the fishing community. The pilot project will be implemented for Govind Sagar.

The Cabinet gave its approval to declare Baisakhi Nalwar Mela Jhandutta and Nalwar Mela Sunhani in Bilaspur district as District level Fair to promote rich culture and tradition of the district.