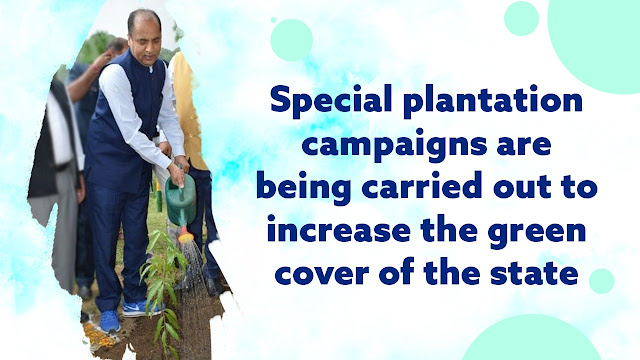 The new schemes launched by the state forest department are not only ensuring increase in the green cover and environmental protection but also in providing livelihood opportunities to the local people of the state.


State govt. is giving a lot of attention to increase the forest cover of the state:

Special plantation campaigns are being carried out to increase the green cover of the state. Last year, 88,53,532 saplings were planted on 9785 hectares of forest land. This year, 65,34,217 saplings were planted on about 7499 hectares of forest land under the special plantation campaign.For the first time in the state, extensive publicity campaign is being conducted in areas sensitive to forest fire and people are being made aware to save forests from fire by various means. A new manual has been created for forest fire prevention and immunization. Apart from this, a Rapid Forest Fire Force has been formed by connecting the citizens of the state with the fire alert SMS service based on the satellite of Forest Survey of India so that the information of forest fire can be immediately reported and appropriate action could be taken..

166830 Saplings were planted under Van Mitra: 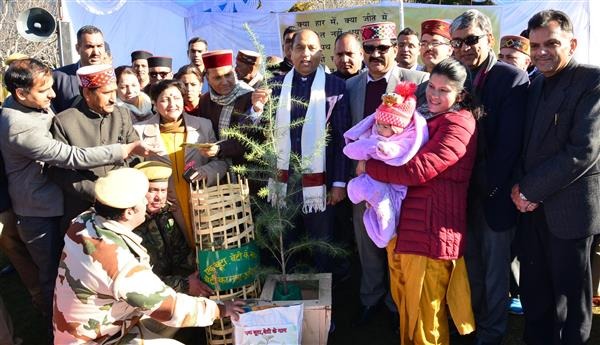 The Van Mitra scheme has been started with a view to inculcating the spirit of conservation of forest and environment among school students. Under this, a fixed forest area is being allocated to plus two schools for plantation and looking after the saplings by the students. Last year, 228 schools and 164.30 hectares of land were selected and 166830 saplings were planted under this scheme. During this financial year, 146 schools and 131.5 hectares of land have been identified and a target of planting 130100 saplings.


Eco-Tourism to be promoted in Manali and Mandi Distt.

The Forest department is also playing an important role in promoting eco-tourism. Rs. 18.18 crore have been allocated for Janjehli area of Mandi district for eco tourism development. This amount will be spent on the improvement of trekking routes, forest rest houses, public facilities and forest checks. The Union Ministry of Environment and Forests has provided an amount of rupees three crores each for Manali and Nachan for the development of natural parks and walking paths. Apart from this, camping sites have been started at 25 places to promote eco-tourism in the state.

JICA is being implemented in six districts:

The Himachal Pradesh Forest Ecology Management and Livelihood Improvement Project of Rs. 800 crore funded by Japan International Cooperation Agency (JICA) is being implemented in 18 forest divisions of six districts of the state. Last year, Rs. 11.58 crore were spent under the scheme which aims at increasing the forest area and providing local people with forest-based livelihood opportunities. A provision of about Rs. 29.71 crore has been made on this project this year. 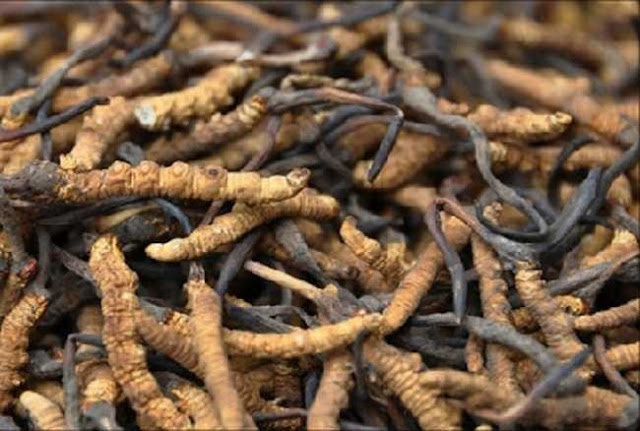 The community forest promotion scheme has been started to actively connect the local people in the forest management. Under this, saplings will be planted on the vacant forest area near the villages, and people will also do the work of land and forest enrichment. The state government has also launched another scheme named Van Samriddhi-Jan Samridhi, which aims to create employment opportunities by selling wild herbs and promoting their production from private land.Under this scheme, arrangements are being made for the maintenance, value addition and marketing of herbs after forming a group of local residents who collect herbs. The scheme provides for a grant of up to 25 percent to promote herb-based pharmaceutical manufacturing industries. Apart from this, provision has also been made to give incentives related to herb trading to individual private entrepreneurs. The scheme is currently being implemented in seven districts where groups of local people have been formed and Rs. 45.825 lakh has been spent. This year, Rs 200 lakh has been allocated for this scheme.

The state government has launched another new scheme named Ek Buta Beti Ke Naam, which aims to make people aware of the importance of forests and the rights of girls by planting saplings in the name of a newborn girl.Pine leaves are the main cause of fire. A new policy has been formulated to collect these leaves and remove them from forest land. Under this, a provision has been made to provide 50 percent grant (maximum Rs. 25 lakh) on capital investment for setting up industry based on pine leaves.