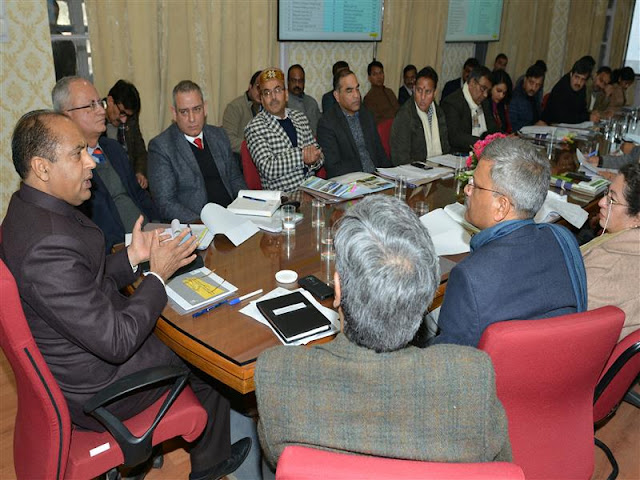 While reviewing the meeting of MoUs signed during the ‘Rising Himachal Global Investors' Meet’ here today, Chief Minister Jai Ram Thakur Ji directed the officers to appoint Nodal Officers for each major project for which MoUs had been signed with the prospective entrepreneurs.

Chief Minister said that as many as 139 MoUs with an investment worth Rs. 7242 crore have been signed after the Global Investors' Meet, thus the total investment had crossed over Rs. one lakh crore. He said that the departments must also ensure that special emphasis be laid on those projects whose ‘Ground Breaking’ had been performed so that the physical construction on the ground could be started.

Jai Ram Thakur said that efforts should also be made on persuading the foreign investors to start their ventures in the State so that work could be started on these projects within the stipulated time. He said that as many as eight MoUs have been signed with entrepreneurs from Netherlands with a proposed investment of Rs. 986 crore, one with entrepreneurs from Germany, seven MoUs with an investment of Rs. 1900 crore with investors from UAE and one MoU worth Rs. 100 crore with investor from Malaysia. He said that the Nodal Officers appointed to keep liaison with foreign investors must remain in constant touch with them so that they could be persuaded to start their ventures at the earliest.

Big industrial houses to be given priority initially:

Chief Minister said that the officers must work with dedication and commitment besides setting targets to actually ensure grounding of investments. He also stressed the need to have one-to-one meeting with the entrepreneurs. He said that big industrial houses like Reliance, TATA, Mahendra, Godrej etc. should be given priority for facilitating them to start their ventures at the earliest.

Jai Ram Thakur said that MoUs must by identified for second ‘ground breaking ceremony’ which could be held during the month of June this year. He said that targets of grounding investments worth Rs. 10,000 crore would be fixed for this ceremony. He said that focus should be laid on persuading the entrepreneurs who have already signed MoUs for time bound ground their projects.While expressing pleasure over the first ground breaking ceremony held on 27th December last year in which the government not only achieved the target of grounding investment but succeeded in grounding projects worth Rs. 13656 crore, Chief Minister said that now efforts should be made by the concerned departments and nodal officers of respective projects to facilitate the entrepreneurs to start up their projects.