Una Bus Stand made with Modern Architecture and equipped with advanced facility. 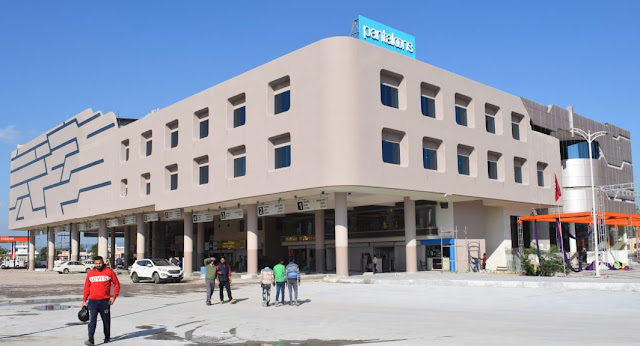 Himachal government led by Chief Minister Shri Jairam Thakur ji has increased the intensity of developmental pace in the state. Historical development works have been done in the state in just two years. One of its hallmarks is in Una district. We are talking about the bus stand with modern facilities of North India established in Una. a point worth mentioning is many years ago the foundation stone of this bus stand was laid, but ironically, the construction work could not be increased beyond the foundation stone. It was noticed when a government headed by Chief Minister Shri Jairam Thakur Ji was formed in the state. then the state government decided that the work will be started soon
Completed in record time:
Achievement is that the government has built this grand bus stand within about two years and dedicated it to the public. Recently, Chief Minister Jairam Thakur Ji inaugurated this bus stand.  and the work is also being appreciated in the entire state. Appreciation is also necessary because high-level facilities will be available here and it was thought impossible to complete such big construction work in such a short time. Una's modern bus stand is built at a cost of about 30 crores rupees.

60 buses can be parked inside the Una bus stand. Along with this, visitors parking facility has been provided for 200 cars. The Ladies and Gents Waiting Areas have been set up separately for the convenience of the passengers. A common waiting area has also been constructed and good seating arrangements have been made here

Special facilities are being provided for Specially -abled persons at Una Bus Stand. This will be the cleanest bus stand in Himachal. Modern toilets have been built in the bus stand and 15 employees have been deployed for cleaning them and dustbins have also been kept in place.

Food courts,  markets and cinema halls will also be available to facilitate passengers at the bus stand. It also employed the youth of Himachal. There will also be arrangements for auto and taxi stands and proper arrangements have also been made for the officers and employees of HRTC. An extremely beautiful temple is also built in the southern style in the bus stand complex.

Modern equipment has been set up in the Una bus stand. CCTV cameras have been installed here. Along with this, strong arrangements have also been made to avoid an accident due to fire.