CM Jai Ram Thakur Ji Chaired the cabinet Meeting,decided to fill up as many as 3636 posts of J.B.T, C&V and TGT categories in elementary 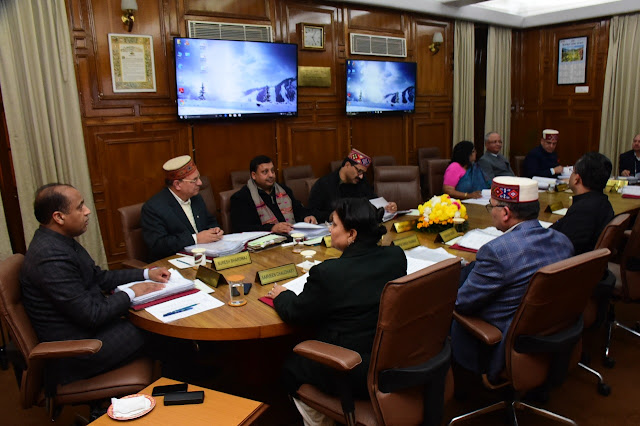 The state Cabinet in its meeting held here today, decided to fill up as many as 3636 posts of J.B.T, C&V and TGT categories in elementary education department. These posts would be filled up on contract basis as per the norms of Recruitment and Promotion Rules. These include 684 posts of TGT Arts, 359 TGT Non-Medical, 261 TGT Medical, 1049 Shastri, 590 Language Teacher and 693 post of JBT.

Cabinet approved the draft MoU for the development of the Airport at Nagchala(Mandi).

The cabinet approved the draft memorandum of understanding for the development of greenfield airport at Nagchala near Mandi between government of Himachal Pradesh and Airports Authority of India (AAI). The Director Tourism has been authorised to sign the MOU and agreements etc. for this purpose with AAI.

The cabinet decided to provide Himachal Pradesh Lok Tantra Prahari Samman Rashi under Maintenance of Internal Security Act (MISA) and Defence of India Rule (DIR) to the people who took active participation for safeguarding the democracy and preserving the fundamental rights of the people from the period between 25 June,1975 to 21 March,1977. It also approved to implement Himachal Pradesh Lok Tantra Prahari Samman Rashi Yojna-2019.

Approval to implement Antodaya in the state:

It approved to implement mission Antodaya in the state to provide livelihood package through various schemes of the central and state government to those families which are facing financial hardship. For this purpose the Rural Development department survey by reaching to such one lakh families to find out whether these families are being benefited under various schemes in second part their economic condition would be assessed and in the third phase a convergence of various schemes would be prepared to benefit of all existing schemes.

Medical facilities to be modernized Cohlear implant centres to be established :

The Cabinet gave its consent for amendment in development plan for Manali agglomeration Kullu valley planning areaThe approval has been accorded to shifting the control of IPH Sub-Division Killar from PWD Division Killar to IPH Division Bhanjraru at Tissa in Chamba district along-with the existing posts. The decision would help in proper functioning of the IPH department in Killar-Pangi Sub-Division.

Yamuna water from State share to be sold would earn 21 crore PA:

The Cabinet gave its consent to sign the memorandum of understanding to sell the water of Yamuna river from the share of Himachal Pradesh on payment basis at Tajewala corridor. The state government would earn Rs. 21 crore per annum from this decision.

As per the announcement made by the Chief Minister, the decision was taken in the meeting to upgrade Sub-Tehsil Haripur to Tehsil in district Kangra.
It gave nod for construction of additional accommodation of rest house at Bagsaid in Thunag Tehsil of district Mandi and additional accommodation at PWD rest house Anni in district Kullu.
The decision has been taken to make amendments in few sections of H.P Building and other Construction Workers (regulation of employment and condition of service) Rules, 2014. This amendment has been made to encourage more construction workers for registration as beneficiary with the Board to avail benefit of various welfare schemes being run by the Board.

The Cabinet approved to start science classes in government senior secondary schools Boul, Piplu and Budhan and commerce classes in government senior secondary schools Basal, Kuriala and Raisari in Kutlehar Assembly constituency of Una district. It also approved to start non-medical classes in GSSS Kharsi and medical classes in GSSS Panjain in Seraj constituency of Mandi district.
The decision has been taken to include Shri Nabahi Mandi in Sarkaghat Tehsil of Mandi district under the Himachal Pradesh Hindu Public Religious Institutions and Endowment Act, 1984 with a view to bring the control of this temple with the state government.


Letter of intent given to M/S Damia Cement (Bharat)

The Cabinet approved letter of intent for three years in favour of M/S Dalmia Cement (Bharat) Limited for extraction of limestone and shale minerals for setting up of cement plant in Shimla district.

Posts to be filled in various Departments

The approval was accorded to fill up 10 posts of various categories in the Architect wing of Public Works Department by direct recruitment through batch wise on contract basis.
It decided to create and fill up 35 posts of Panchkarma Masseurs in Ayurveda department in daily wages basis.It was decided to fill up the vacant post of the District Employment Officer in Labour and employment department.The Cabinet decided to fill up three posts of Law Officers in Irrigation and Public Health department by direct recruitment through HP Public Service Commission on contract basis.It also agreed to create and fill up two posts of Peon on daily wages basis in the office of District Youth Services and Sports offices at Kaza and Keylong.