HP signs 614 MoU's with an investment of Rs. 93,000 crore, our efforts would see the day of light at the earliest, CM 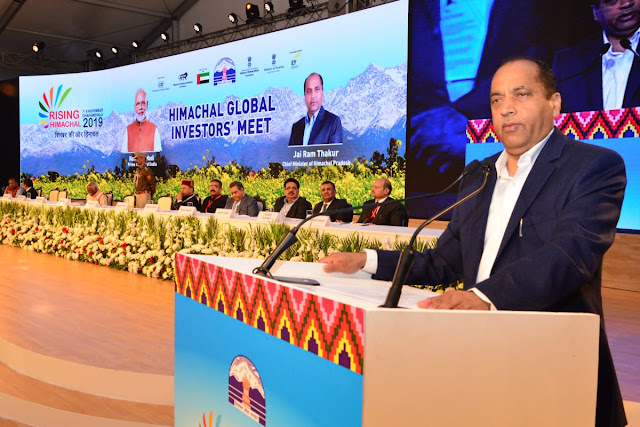 Chief Minister Jai Ram Thakur Ji while addressing the valedictory session said that the State Government has notified several policies in the State to facilitate the entrepreneurs interesting to invest.

New policy formulation clearly shows our resolve of inclusive development:
Jai Ram Thakur Ji said that the endeavor of the State was to make Himachal Pradesh a favorite destination for investment in industries, power, tourism, Agriculture, Ayush, IT, Infrastructure and allied sector. He said that the State Government has notified industrial and investment policy, tourism and eco-tourism policies, film policy, information technology policy, AYUSH policy, and solar power policy, affordable housing policy. These policies clearly bring out Government’s resolve of inclusive and sustainable development in the state, he added.

Chief Minister said that the State Government took maiden effort to organise this mega event which was indeed a historic but challenging decision. However with the cooperation of the entrepreneurs the event was poised to go as a major event to transform the economy of the State. He said that the efforts was also possible due to the continuous encouragement, help and support of Prime Minister Narendra Modi and Union Ministers.

Jai Ram Thakur Ji said that till now as many as 614 MoUs have been signed which would attract an investment of about Rs 93,000 crore. He said that efforts would be made to ensure that the MoUs signed gets all support and help so that they get started at the earliest. He said that the concerned departments would ensure effective follow up to get various clearances and approvals for the projects.

Himachal is the best place  to invest because of its Diversity said Piyush Goyal (Union Commerce and Industries Minister): 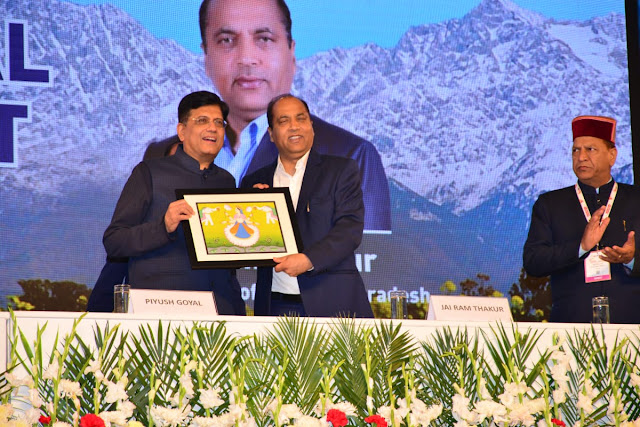 While presiding over the valedictory function of the Rising Himachal Global Investors’ Meet held at Dharamshala Union Commerce and Industries Minister Piyush Goyal today said that the diversity makes Himachal Pradesh as the best destination for investment and the State Government has made it possible for the entrepreneurs to invest here by investor-friendly policies. He said that the presence of a large number of entrepreneurs in this summit reflects how Himachal Pradesh has opted a higher growth trajectory and was marching ahead on the path of development. 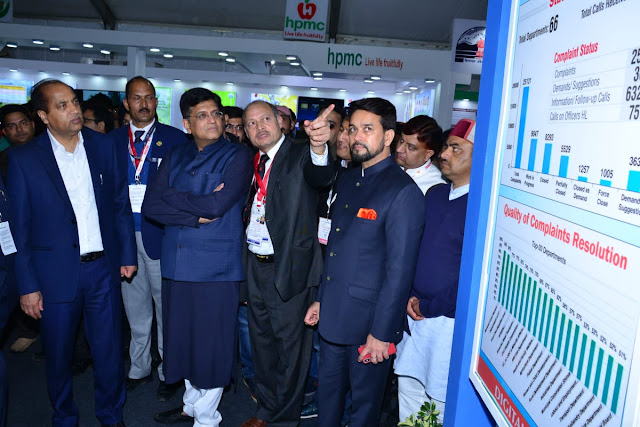 Union Minister said that natural beauty, the environment, the unique flora and fauna of the region, its large bio‐diversity, rolling hills, snow-capped mountains green valleys, virgin forests and diverse culture and traditions makes Himachal Pradesh the paradise for tourists. He urged the participants to explore opportunities in tourism sector.

The Union Minister said that the country was forging agreed on the path of progress and prosperity under the able leadership of Prime Minister Narendra Modi who has set a goal to make the country a $ 5 trillion economy and the last five years, we have added about one trillion dollars to it. We are working hard to achieve the goal of $ 5 trillion, he added. He also congratulated the one percent to the country’s economy.He also went around the exhibition stall and envisaged keen interest in it. 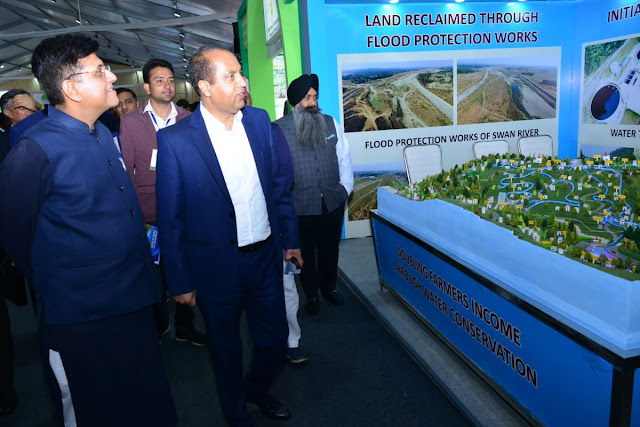 Union Minister of State for Finance congratulated the CM for this Mega event:

Union Minister of State for Finance and Corporate Affairs Anurag Singh Thakur congratulated Chief Minister Jai Ram Thakur for organising this event which was bound to change the economy ad socio-economic scenario of the State. He said that the Development of MSME sector was a priority for the Union Government as this was the back-bone of our industries. In this year’s budget, for ease of access to credit for MSMEs, our government has introduced providing of loans upto rupees one crore for MSMEs within 59 minutes through a dedicated online portal. 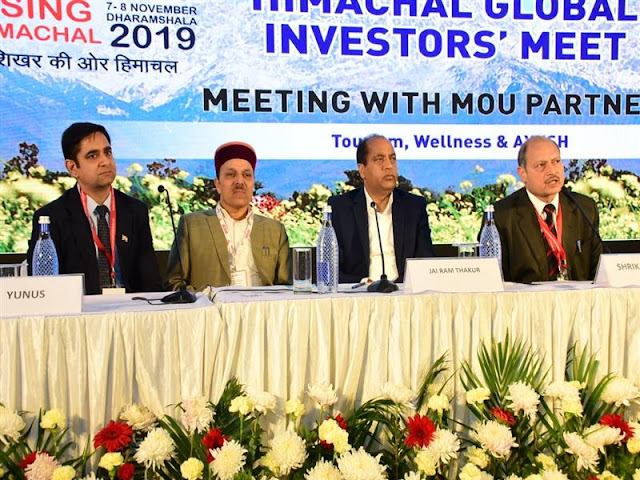 Chief Minister Jai Ram Thakur while addressing the MoU holders in industries including manufacturing, pharmaceuticals, food processing, IT and Electronics etc. at Dharamshala during the second day of the Rising Himachal Global Investors Meet said that it was for the first time that the state government had taken a holistic approach to attract investment for the state.
Jai Ram ThakurJi said that Himachal Pradesh had varied climatic conditions and diverse topographic making it suitable for a growing wide range of medicinal plants. The state government would provide all possible help to the interested entrepreneurs for setting up their units in the state.

He also had a meeting with the MoU holders of tourism, wellness, and AYUSH where he said that the state offers investors a variety of choices in the tourism sector like adventure, wildlife, eco-tourism, heritage, spiritual, monuments, religious, skiing, etc

Industries Minister Bikram Singh while thanking the Union Minister and the industry leaders to grace the occasion invited the investors to come forward and invest in Himachal Pradesh. He assured that the State will extend all possible help to the investors. He said that land banks have been established to provide land to the entrepreneurs easily.

Director-General of Confederation of Indian Industries (National Partner) Chandrajit Banerjee said that  Himachal Pradesh has immense potential for emerging as a major industrial hub of the country. He said that CII was opening as a Skill Institute at Dharamshala for Skill upgradation of the youth.
Chairman Hero Group Rahul Munjal said that under the able leadership of Chief Minister the industry has seen a solid foundation for setting up new industries and expansion of existing units. He also appreciated the investors friendly policies framed by the State Government.Chairman Vardhman Group Sachit Jain also spoke on the occasion.

Founder Chairman Sampark Foundation Vineet Nayar said that presently the Foundation was running Sampark Smart Shala in 76,000 schools of six states of the country. He said that the Foundation has started working towards enhancing learning out comes for millions of children of India.
Additional Chief Secretary Industries Manoj Kumar presented vote of thanks. 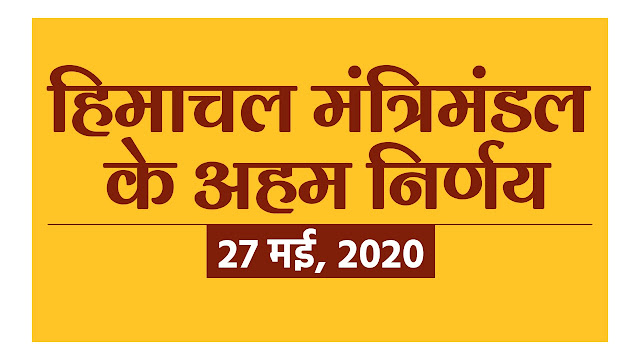