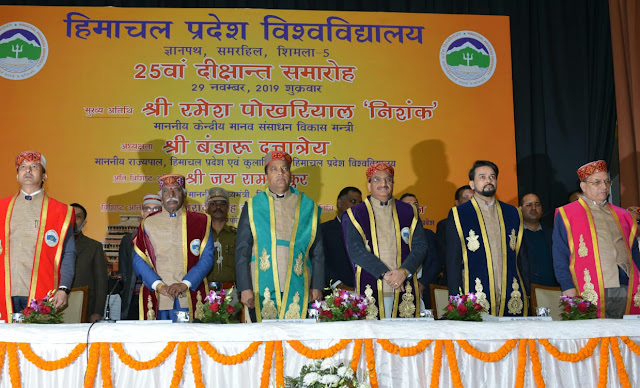 As many as 448 Degrees and Gold Medals were awarded on the occasion to meritorious students, out of which 276 were females and 172 males. On the occasion, Vivek Kumar was awarded D.Litt Degree, whereas Afghan national Mohammad Sharif Shaheen was also awarded gold medal in Public Administration.

Challenges in life become opportunities if you accept them: 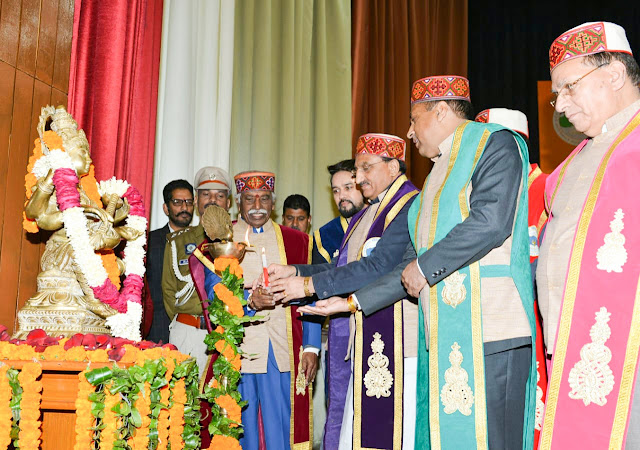 Union Human Resource Development Minister Ramesh Pokhriyal 'Nishank' awarded meritorious students of the University with gold medals and degrees.In his address, Union Minister said that India was known as the ‘Vishwa Guru’ across the world since time immemorial due to knowledge and wisdom. He said India believe in universal brotherhood and peaceful co-existence. He said the challenges in life become opportunities for those who accept them. He said that with launch of schemes such as ‘Make in India’, Skill India, Start-Up etc., there were ample employment and self-employment opportunities to the youth of the country.

Students to play a pivotal role in Modern India:

He also congratulated the medal recipients and wished them prosperous and bright future. He said youth of the country have a major role to play in the vision of ‘New India’ and urged the students to work with dedication to make India a five trillion economy in the next few years. He said that Union Government was coming up with new education policy to strengthen education system in the country and make education employment oriented. 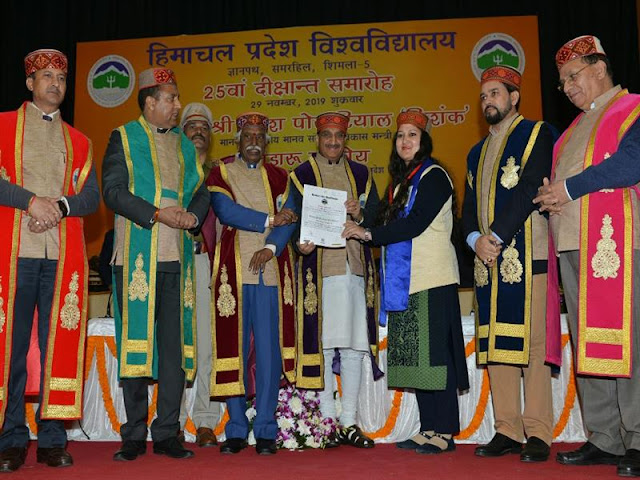 Governor Bandaru Dattatraya said that the aim of education should be gain of knowledge along with character building. He called upon the students to develop skills along with higher education, which would help getting employment.The Governor said that today, girls were excelling in every sphere of life. In most of the educational institutions, girls outnumber boys in the medals tally and said that it was a positive sign that the society was changing. He said that 124 gold medals were also awarded today in Himachal Pradesh University, out of which 87 gold medals were in the name of girls. Similarly, 189 girls were awarded PhD degree out of the total 323 students and a total of 448 degrees and medals were awarded today, of which 276 were girls. He congratulated the girl students for this achievement.

Himachal set to be the educational hub of the country: 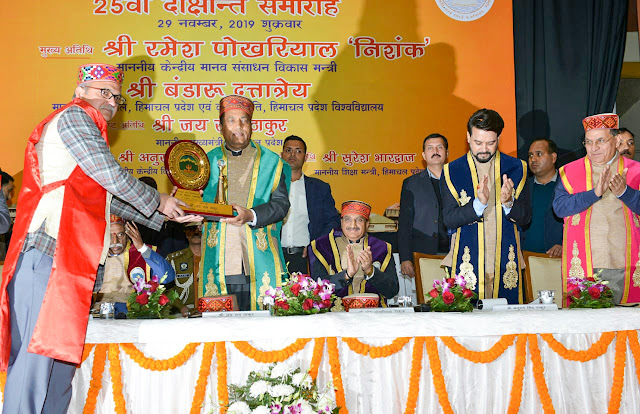 Chief Minister Jai Ram Thakur said that the State Government was committed to provide quality education to students of the State by strengthening the existing infrastructure. He said that the motto of the Government was to make Himachal Pradesh an ‘Education Hub’ of the country. He said that recently Himachal Pradesh was awarded as the Best State amongst Big States category in Education and Health sectors in the country in a survey conducted by a prestigious news magazine ‘India Today’. He said that the award to State would further motivate the Government to work with greater dedication and commitment in the field of education.

Drug abuse a concern for the state need students Contribution to eradicate this disease:

Chief Minister said that convocation was indeed a memorable moment in the life of students as they get reward for their hard work and dedication. He said that the students on this occasion should also remember and pay respect to their teachers, parents and family members for their continuous support for making this moment a reality. He also appreciated achievements of girl students as out of the total 448 degrees and gold medals awarded today, 276 were awarded to girls.
While expressing concern over increasing tendency of drug abuse among the youth, Jai Ram Thakur urged the students to make campaign against the drug abuse a movement. He said this social vice was posing a threat for the very existence of the society. He also urged teachers and parents to come forward to wipe out this social vice from the society.

Chief Minister wished the degree and gold medal winners a very eventful and bright future. He said that the HP University was emerging as the premier educational institute not only in the State but also in the entire northern India.