Historic day for Himachal.10 MoUs signed for hydro projects with an investment of Rs. 25,772 crore 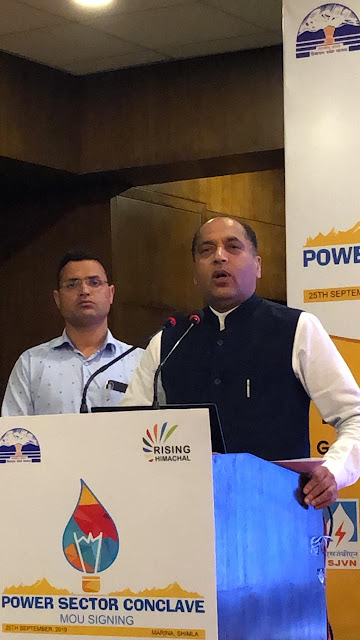 In the series of domestic roadshows, for attracting investors interest in the ‘Global Investors’ Meet scheduled at Dharamshala for November 7th-8th, a Power Conclave was organized by the Department of MPP and Power in which as many as 10 MoUs were signed for hydro projects with an investment of Rs. 25,772 crore with a capacity of 2927 MW providing potential employment to 13,250 persons with NTPC, SJVNL, and NHPC for harnessing identified hydro projects in the State here today.

Power projects not only catering state Demands but exporting power to many states: 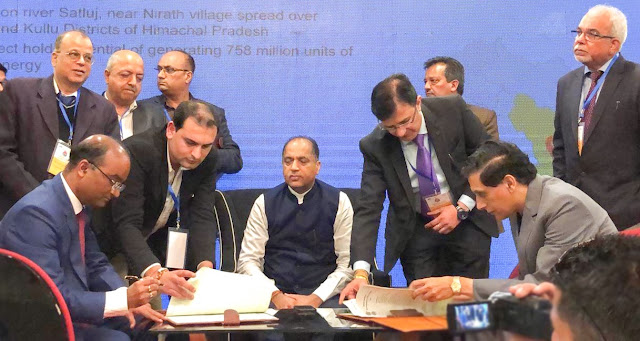 While addressing the investors on the occasion, Chief Minister Jai Ram Thakur said that the three energy majors of the country that is SJVNL, NTPC, NHPC were playing a pivotal role in harnessing hydro power in the State. He said that it was a matter of pride for Himachal Pradesh to be one of the leading states in the country in hydro energy sector. He said that the State Government understands the importance of this sector, as it not only meets the power requirements of the State, but was a exporter of power to the neighbouring states and earns revenue for the State exchequer. The State Government was committed towards providing all possible help to the investors in energy sector,

just before the investor meet MoUs worth of 75700 crore signed:
Chief Minister said that vision of organising the Global Investor Meet was aimed at attracting investment to the State thereby ensuring economic activities in the State. He said that this would provide employment and self employment opportunities to the youth and thereby transform the economy of the State. He said that the State Government till now has succeeded to get 570 MoUs worth about Rs. 75,700 crore signed, which were bound to usher in an era of progress and prosperity in the State.
Jai Ram Thakur Ji said that the recent initiatives taken by the State Government like simplification of procedures, deferment of free power royalty for critical period of 12 years for allotted projects and reduction in upfront premium and capacity addition charges, would go a long way in achieving growth and sustainable development in hydro sector.

Chief Minister  invited the investors on behalf of the State Government for Global Investors’ Meet in Dharamshala on 7th & 8th  November 2019. 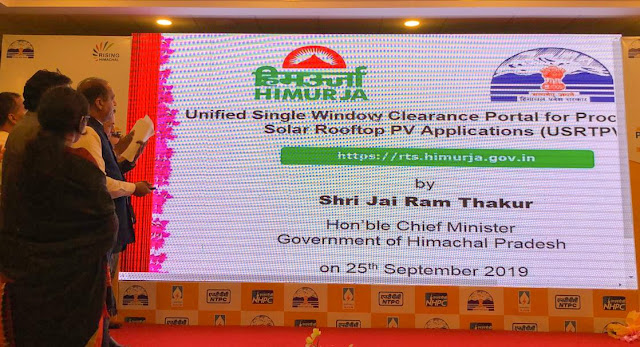 Jai Ram Thakur Ji  launched HIMURJA’s online portal Unified Single Window Clearance Portal for the processing of Rooftop Solar PV (USRTPV), which will enable the consumers to apply for rooftop solar system online and relevant stakeholders would be able to process applications online through this portal.
Mini Ratna from the State, SJVNL signed MoUs for 7 Hydro Electric Projects (HEP) with a total capacity of 1958 MW; these are Luhri Stage - I, Luhri Stage - II, Dhaulasidh, Jangi Thopan Powari, Purthi, Bardang. MoUs were also signed with NTPC for projects with total capacity of 520 MW for construction of Miyar HEP and Seli HEP. Apart from it, MoU was signed with NHPC for Dugar HEP project which has a capacity of 449 MW

MoU worth of 1040 crore signed in Solar power sector:
Apart from Hydro Power Projects, the department of MPP & Power has also entered MoUs worth Rs 1,040 crore with three private entities in Solar Power Sector which shall generate employment to about 1,500 persons. Thereby the cumulative investment from the above MoUs would be of Rs. 26,812 crore with generation of employment to 16,000 persons.

Education Minister Suresh Bhardwaj said that Himachal Pradesh was blessed to have the able, dynamic and vibrant leadership of Chief Minister Jai Ram Thakur. He said that State Government was poised to become power State of the country under his leadership.
Chief Secretary Dr. Shrikant Baldi while thanking the investors for making the Power Conclave a grand success invited the investors on behalf of the State Government for Global Investors’ Meet. He also thanked the Power Department for organizing this Conclave which provided the investors an opportunity to invest in the power sector.

Inside tour of Power conclave: