CM: Time to have a proactive approach in educating citizens about health Schemes: 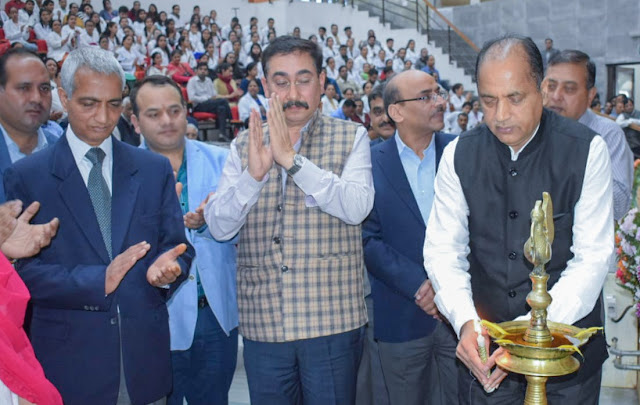 On completion of one year of implementation of Ayushmaan Bharat Pradhan Mantri Jan Arogya Yojna in the State, Chief Minister Jai Ram Thakur Ji gave a clarion call to the doctors and other medical professionals to adopt proactive approach for educating the people of the State so that they could avail maximum benefits of various health schemes launched by the State Government. He was speaking in a function organized at Indira Gandhi Medical College, here today..

Ayushmaan Bharat a boon for needy.
Chief Minister said that the vision of healthy India can only be achieved if we have healthy citizens. However, it was felt that at times poor people were not able to derive advanced and better treatment because of the high prices of medicines. Visualizing the same, Prime Minister Narendra Modi had launched Ayushmaan Bharat Scheme for providing free treatment up to Rs 5 lakh to the deserving and the poor so that they were not deprived of treatment in case of serious illness.
Jai Ram Thakur said that the Ayushmaan Bharat Yojna was launched on 23rd September, 2018 by Government of India for the people of the Country and for providing an insurance cover of Rs. 5 lakh. As many as 50 crore people had been covered under this Scheme, which was ensuring that the poor patients were not deprived of specialized health care facilities due to want of money.

31937 beneficiaries till date under Ayushmaan Bharat.
Chief Minister said that the State Government was also implementing this Scheme effectively so that maximum people could be benefitted. He said that as many as 22 lakh people of the State had been covered under the Scheme and as many as 31,937 people of the State have been benefitted under this Scheme till date. The Government has spent over Rs. 31 crore under this Scheme. He said that the State Government has also launched "Him Care Scheme" in the State to provide health insurance cover to those families who have been left out from Ayushmaan Bharat Yojna, said the Chief Minister, adding that nearly 6.42 lakh families have been registered under the Him Care Scheme in which a sum of Rs.37 crore, has been incurred so far.

Close to 100 crores spent on Heath facilities in the state
He said that Rs. four crores has been spent under the Mukhyamantri Chikitsa Sahayata Yojna in the State. A sum of Rs.30 crore has also been provided by Chief Minister Relief Fund (CMRF) for the treatment of the poor patients during this period. In this way the State Government has spent about Rs. 100 crore for ensuring the treatment to the poor and cater them with better health facilities.

Crediting Doctors, paramedical staff and all those involved in health sector for effective implementation of the scheme. Chief Minister said that the State Government had also announced Sahara Yojna for providing relief to the families having a member suffering from serious illness. Under this Scheme, Rs. two thousand were being provided per month for the better care of the patient, 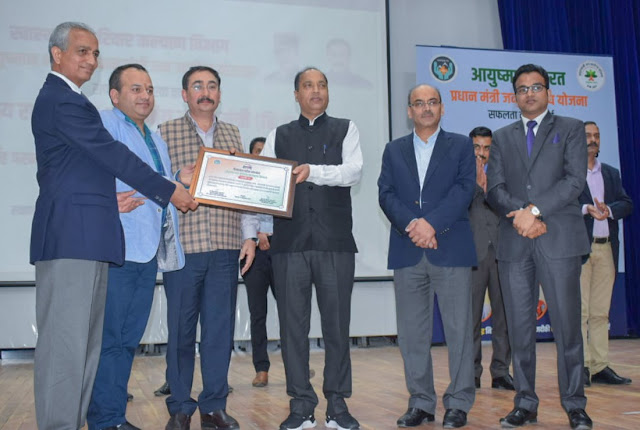 Chief Minister also honoured CMO Kullu, Dr. Sushil, CMO Dr. Padam Negi Kinnaur, CMO Sirmour K.K. Prashar for best enrolment of the patients under Ayushmaan Bharat Programme in their respective district. Chief Minister also honoured CMOs for best enrolling the patients under Him Care Scheme. He also honoured Medical Colleges and other hospitals for catering better services in providing cashless health care treatment to the patients under various schemes.
Health Minister Vipin Singh Parmar said that over 7.78 lakh people of the State had prepared Golden Cards under the Ayushmaan Bharat Scheme. He also thanked the Chief Minister for launching Him Care Scheme for the State so that the cent-percent population of the State could be covered under the Scheme. He said that the State Government was ensuring that no one in the State was deprived of getting health coverage.
Additional Chief Secretary R.D. Dhiman while addressing the gathering said that this was the biggest scheme of Independent India aimed at providing help in getting medical treatment to the poor and downtrodden in case of serious ailment He said that adequate infrastructure was being developed in the State so that the Scheme could be implemented effectively. He also stressed a need for a balanced and healthy lifestyle.
Special Secretary Health Dr. Nipun Jindal while welcoming the Chief Minister and other dignitaries present on the occasion said that the State Government was committed for ensuring effective implementation of this Scheme so that maximu