CM Demands Himachal to be made full-fledged Member in BBMB: 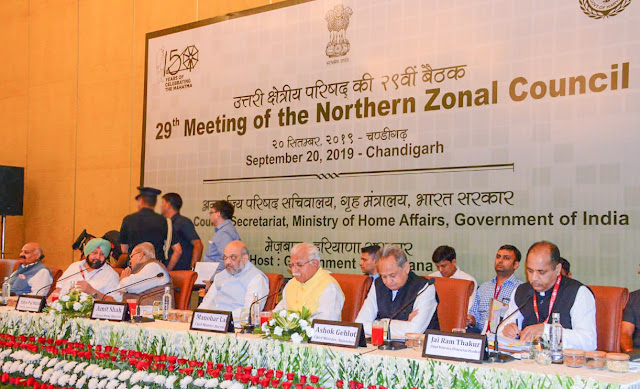 Chief Minister Jai Ram Thakur Ji  has again demanded the Government of India to make Himachal Pradesh as a full-fledged Member in Bhakra Beas Management Board (BBMB) projects by amending the Punjab Re-organization Act, 1966 so that pending cases could be resolved at the earliest.

The demand was made by Chief Minister Jai Ram Thakur Ji while participating in the meeting of the Northern Zonal Council (NZC) held at Chandigarh today. Union Home Minister Amit Shah presided over the meeting which was attended by the Chief Ministers, Ministers of Northern region and senior officers of the Government of India and Northern States.


Time-bound rehabilitation of Pong Dam oustees:
The Chief Minister said that the people of the State have always upheld the national interest and had provided their fertile land for the construction of various dams in the country. He said that a Coordination Committee should be constituted of the Relief and Rehabilitation Officers of Himachal Pradesh and Rajasthan  Government so that time-bound settlement of pending issues of rehabilitation of Pong Dam Oustees of Himachal Pradesh can be done. A National Level Committee be also constituted for monitoring of this issue,

Clreaences can not be the hindrances in Development:
Jai Ram ThakurJi also urged the Union Government to vest the power with the State Government for forest clearances regarding forest land up to five hectares, so that the work on small developmental projects could be completed within the stipulated period and pace of development does not suffer due to delay in forest clearances.

Himachal already evolved a joint strategy on drug trafficking:
Expressing concern over increasing tendency of youth towards drug abuse, Jai Ram Thakur Ji said that a joint strategy had been evolved by Himachal Pradesh and its neighboring States to tackle this menace which had woven itself deep into the fabrics of our society. He urged the Union Government that the Central agencies should share information regarding drug trade with all the states. CCTV Cameras had been installed in the border districts of the State to keep surveillance on the drug peddlers, he added.
The Chief Minister underlined the need to resolve inter-state boundary disputes with the neighboring States at the earliest. He said that district administration Leh-Ladakh had made un-authorized encroachments in Lahaul-Spiti district in the territory of Himachal Pradesh.  He urged the Union Home Ministry for the early settlement of this issue.
To check unauthorized mining, Chief Minister said that a joint strategy should be chalked out to tackle the unlawful quarry of river beds and alongside river banks. He said that there should be no laxity regarding illegal mining and strict action should be taken as per law against the defaulters

A complete ban on plastic usage: 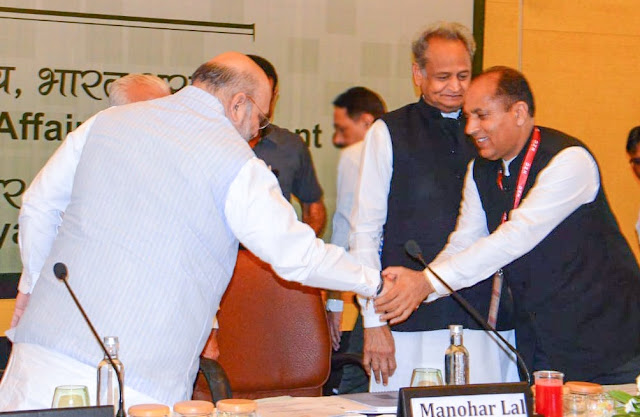 Airport Nagchala to be taken on priority:
Airport Nagchala in Mandi district on priority and declare it as a Project of National Importance keeping in view its importance from a strategic point of view for the security of the nation.  He also requested for taking up the Chandigarh-Baddi rail line project at the earliest.
Irrigation and Public Health Minister Mahender Singh and Chief Secretary Dr. Shrikant Baldi were also present on the occasion.