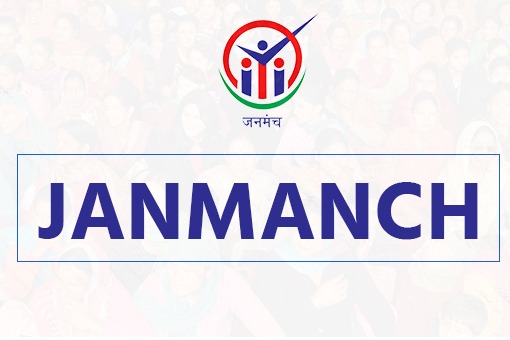 The State Government is striving hard to redress the complaints and grievances of the people of the state nearer to their homes. To achieve this objective, the State Government started Jan Manch on 3rd June 2018 since then.people have shown great enthusiasm in Janmanch and actively have participated in this.
Around 1534 demands and complaints were received during the Jan Manch organized on Sunday in eleven districts of the state barring Kinnaur district as per the reports received at the state headquarter. Out of these 664 cases were settled on the spot and rest have been referred to the concerned departments for early redressal. Besides, more than 850 LPG connections were also distributed under Mukhya Mantri Grihini Suvidha Yojana to the women beneficiaries.

Coordinator of the Jan Manch, Narender Bragta said that all the sections of the society are being benefitted with effective implementation of this program in the state. Before today's Jan Manch, 33,129 demands and complaints out of total of 40,298 have been redressed. As many as 62084 girls of the state have been honored under Beti Hai Anmol and Beti Bachao, Beti Padhao schemes. The digital ration cards have been provided to 5.92 lakh and 52, 808 LPG connections have been provided to the eligible beneficiaries. He said that 45, 678 expectant mothers have been registered and 22,551 persons have been benefited under different pension schemes.
Narender Bragta said that around 1.72 lakh Jan Dhan accounts have been opened during the Jan Manch held previously besides releasing 40,858 certificates relating to different departments.

District Sirmaur 63 Demands and complaints received, 20 settled on spot
Speaker of Vidhan Sabha Dr. Rajiv Bindal directed the public works department to blacklist the contractors found responsible of unnecessary delays in various developmental works so that people could be benefited. He was presiding over the Jan Manch at Fagu in Bhanat Panchayat in which 63 demands and complaints were received and 20 were disposed off on the spot.
Dr. Bindal said that Jan Manch has emerged as the best medium to the people for raising and redressing their demands, complaints and developmental issues and they should make best use of this programme. He also directed the officers of different departments to ensure time bound action on every complaint and demand raised during the Jan Manch.
The Speaker also directed to ensure all parameters in tarring of roads in the Rajgarh area for which Rs. 18.87 lakh has been sanctioned.
He distributed 302 free gas connections, FDs and other certificates and documents to the beneficiaries.

District Shimla
Irrigation and Public Health Minister Mahender Singh chaired the program at Dhawan in Chopal Assembly segment of Shimla district. Speaking on the occasion, he said that keeping in view the huge losses in the Chopal area due to heavy rains in the monsoon, the matter would be raised with the Chief Minister to provide additional funds for restoration and relief works. He said that the priority would be given to restore and repair damaged roads, drinking water and irrigation supply schemes and other infrastructure in the area.
During today's program, 195 complaints and demands were received out of which 116 were settled on the spot and rest have been referred to the departments concerned for early redressal.
Mahender Singh distributed seven LPG connections, 65 horticulture cards, FDs, baby kits and other certificates to the beneficiaries on this occasion.
More than 370 people turned up for their medical check during the free medical camps organized by the health and Ayurveda departments.

District Bilaspur
Urban Development Minister Parveen Chaudhary, who presided over the Jan Manch at Dayoth under the Naina Devi Assembly segment said that about two lakh women of the state have been benefited under the Mukhya Mantri Grihini Suvidha Yojana so far. She said that the state government launched this scheme to benefit those women who could not be covered under the Pradhan Mantri Ujjawala Yojana.
She said that the government has launched several new schemes to ensure welfare of every section of the society and urged the people to come forward in taking benefit of these schemes for bringing change in their lives.
Sarveen Chaudhary distributed LPG connections to 30 beneficiaries besides various other certificates and documents.
As many as 441 grievances were received during the Jan Manch and 232 were settled on the occasion.

District Chamba
While presiding over the Jan Manch at Bairagarh in Churah Assembly constituency, Health Minister Vipin Singh Parmar stated that the state government would soon appoint two thousand community health officers in the sub-health centres of the state who are presently under six months training.
He said that the state government was resolute to provide quality health care services to the people at their door-steps for which besides filling up the vacant posts of the doctors and para-medical staff, priority is also being given to strengthen the infrastructural facilities. He said a provision has been made to provide financial assistance of rupees two thousands per month to the eligible beneficiaries under the Sahara scheme of the state government who require regular medical treatment.
He distributed LPG connections to 83 beneficiaries and FDs to 27 girls.
During today's Jan Manch, 39 cases were received out of which five were settled on the spot.

District Hamirpur
Industries Minister Bikram Singh chaired the function at Tal in Hamirpur Assembly constituency where 122 demands and complaints were received and 34 were redressed on the occasion.
He provided gifts and certificates to family members of 15 new born girls, drafts of Rs. 12,000 each to six beneficiary girls and kits to 20 Anganwari workers under Beti Bachao Beti Padhao scheme besides documents to 57 beneficiaries under Himachal Grihini Suvidha Yojna.
More than 100 people availed the facility of free medical check up camps organised by the health and ayurveda departments.
Local MLA Narender Thakur was also present on the occasion.
District Kullu
Forest Minister Govind Singh Thakur said the state government was making honest efforts to increase the green cover of the state from 27.5 percent to 37 percent. He said that more than 44 lakh plants have been planted during two special plantation drives in the state and the work on fencing of the forests was also under progress. He said the Centre has released Rs. 1660 crore under CAMPA which would be spent on various forestry activities.
Govind Singh Thakur, who was presiding over the Jan Manch at Shamshi in Kullu district gave a clarion call to the people of the state to cooperate with the government in the proper implementation of Road Safety Act being implemented to ensure road safety and save valuable human lives.
He distributed 183 LPG connections, FDs to eight girls besides green cards and smart cards on behalf of the HRTC.
In all, 90 demands and complaints were presented during the Jan Manch out of which 61 were disposed off on the spot.
District Una
Social Justice and Empowerment Minister Dr. Rajiv Saizal chaired the function at Chintpurni where 181 cases were reported and them 24 were resolved on the spot.
Dr. Saizal said that the Jan Manch is the most popular programme of the state government which has provided an opportunity to the common citizens to get their works done with ease near to their homes. This decision has especially benefited those people who usually don't get time to visit government offices for their problems and demands.
He said that the schemes like Mukhya Mantri Grihini Suvidha Yojana, Ujjawala Yojana, Himcare and Aayushman Bharat etc. have proved a boon to the poor and needy persons. He added that the state government is according top priority to tourism sector for strengthening the economy of the state and providing ample employment opportunities to the youth.
District Kangra
The Jan Manch in Kangra district was organized at Kandwari in the Palampur Assembly segment which was presided over by Deputy Speaker Hansraj. As many as 119 cases were presented by the people during today's programme out of which 73 were settled on the spot.
He distributed LPG connections to 99 and FDs to eight beneficiaries on this occasion.
Local MLA Ashish Butail was also present on this occasion.
District Solan
Chief Whip Narender Bragta presided over the Jan Manch at Kothon in Solan Assembly constituency where 64 complaints and demands were received and 8 were disposed off on the occasion.
Narender Bragta said that proposal of Rs. 1.52 crore has been prepared for maintenance of Tank road-Seri-Damrog-Jatoli link road which would be started soon. He directed to explore possibilities for starting bus service between Solan and Anu road via Sheel besides starting of Mudrika bus service in different areas of Solan town as per the demand of the people. He said the sewerage system would be made functional in Ward number 9 and ten of the Solan town within three months whereas a committee would be constitute in the chairmanship of DC Solan to find the solution for solid waste management in eleven adjoining panchayats of Solan town.
He distributed LPG connections to 9 beneficiaries and honoured nine girls for outstanding performance in academic and sports activities.
MLA Dr. (Col.) Dhani Ram Shandil and former Minister Mahender Nath Sofat were also present on this occasion.