To create additional sources of income to the farmers in the state and to provide self-employment opportunities to the local youth, an action plan has been drawn to give a big boost to fisheries so that 'Neel Revolution' can be brought in the state.

A plan has been prepared to promote fisheries in the reservoirs of the state, especially trout in the cold rivers of the state. Under this scheme, fisheries-related families are being motivated to adopt trout farming and many incentives are also being provided to them.
In the state this year, the target of creating 100 additional trout units and 10 hectares of the pond for carp fish has been created so that employment opportunities of about 550 people will be available. In order to meet the growing demand of trout fish seed in the state, two trout hatcheries will be set up in the private sector.
Animal Husbandry and Fisheries Minister Virendra Kanwar said that about 13402 tonnes of fish worth about 171.57 crore rupees have been produced from all the water sources in the state this year. 8.34 metric ton trout has also been produced from departmental trout farms. In addition to that, this year, 560 MT of trout has been produced in the private sector about Rs. 25.21 crore
Virendra Kanwar informed that as a result of the successful breeding of 'Rainbow' trout in the state, now private sector trout units have been established in Shimla, Mandi, Kangra, Kinnaur, Chamba and Sirmaur districts besides Kullu district. He said that a target has been set to produce 1000 metric tons of trout fish by the year 2022 in the state so that maximum employment opportunities can be created for the youth through 'Neel Kranti' in this state

various grants being given
Various schemes are being implemented by the State Government to adopt fishery activities to the youth of the state. In order to establish fishery units in the state, a provision of 40 percent grant for the general category and 60 percent grant for scheduled castes, tribes and women has been made. Under this scheme, hatcheries, fish form, small and large fish ponds and trout units are being encouraged to be installed.
.
fishery processing units to be set up 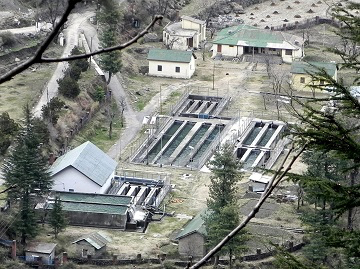 The state government is also setting up four fishery processing units in Bhakra (Govind Sagar), Khatiyar (Pong Dam), Kathod Kalan (Una) and Rataud (Solan) in the state with the technical assistance of Central Technical Institute, Kochi. These units will make fish products like fish pickles, fish fillings, fish bowls, fish fingers, papad etc. available in the market. Modern technology will be used to make these products. With this technology, products can be used for more than one year from the date of productivity.