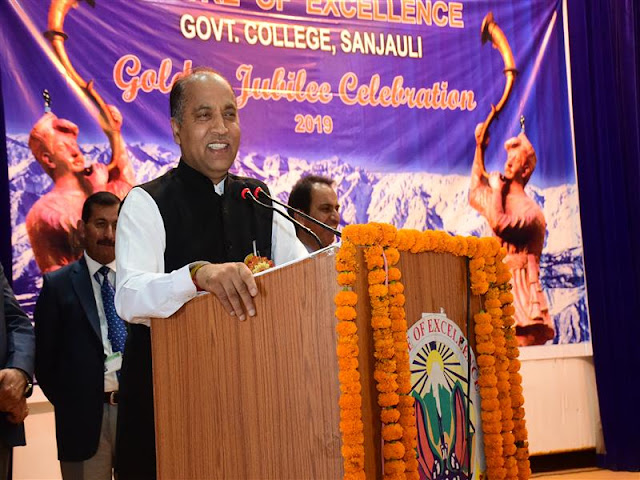 Chief Minister Jai Ram Thakur while addressing the Golden Jubilee Celebration of the Centre of Excellence Government Degree College Sanjauli here today announced the starting of Post Graduate classes in English and Hindi, BBA and PGDCA courses in this college from next academic session.
Chief Minister said that success in life largely depends on the availability and commitment of the talented and trained Human Resources and the role of education is most crucial in this. He said that the State Government has started several initiatives to underscore the need and importance of research and innovation in institutions of higher learning.

Himachal is the 2nd most literate state in the country:
He said that we should ensure that the educational institutions become potent tools of change that helps to make our State as well as a nation a more just, equitable and educated society. He said that the State has made immense progress in all spheres of development and education in particular and the State has shown the way for most of the developed states of the country. He said that today Himachal Pradesh was the second most literate State of the country after Kerala. He said that the girls, in particular, were doing a commendable performance in education and had outshined the boys in every competitive examination.

Drug abuse among youth a serious concern:
While expressing concern over the increasing incidences of drug abuse among the students, the Chief Minister urged the teachers to come forward to check this social evil. He said that menace of drugs was one of the most dreaded social evils which were damaging the very fabric of the society.
The Chief Minister said that the State Government was committed to strengthening this college. He said that as soon as the land was made available, girls’ hostel would be constructed in the college.
The Chief Minister also released the Souvenir and e-Journal marking the Golden Jubilee of the College on the occasion.

Education minister also addressed the faculty:
Education Minister Shri Suresh Bhardwaj while congratulating the teachers, students and former students of the College said that the College has the honor of being the only Centre of Excellence in the State. He said that several alumni of this college has created a special place for themselves in various spheres. He said that Himachal Pradesh has made unparallel progress in the field of education He said that the State has a vast network of quality educational institutions providing the best education to the students nearer to their homes.
Principal, Government Degree College Sanjauli Dr. C.B. Mehta welcomed the Chief Minister and other dignitaries present on the occasion. He also highlighted the achievements of the college during the last fifty years.