Chief Minister appeals to people to remain healthy and fit.

Each one of us spares at least an hour a day in the morning for a few physical excises such as yoga, jogging or at least brisk walking for keeping yourself physically as well mentally fit. This was stated by the Chief Minister Jai Ram Thakur while interacting with the media after the Fit India Movement celebrated in the Vidhan Sabha complex here today.
Prime Minister Narendra Modi launched the nation-wide “Fit India Movement” today from the Indira Gandhi Stadium in New Delhi on the occasion of National Sports Day 2019 across India that marks the birth anniversary of the legendary hockey player Major Dhyan Chand, who was born on August 29 in the year 1905. 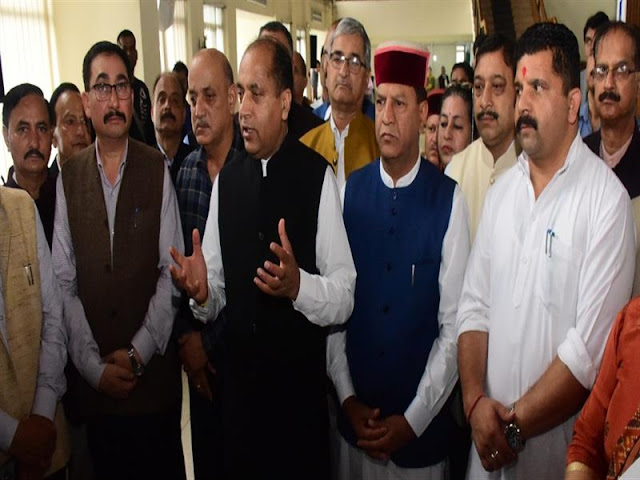 The Chief Minister said that physical activities are treated by many countries as cultural activities. He appealed to every citizen to remain healthy and fit. He said that fitness has always been an integral part of our culture as a few decades back, a normal person would walk 8-10 km. in a day. He said that the entire program has been conceptualized by Prime Minister Narendra Modi who has also given simple tips that can make people healthy in their day-to-day lives.

Speaker Vidhan Sabha, Council of Ministers, MLAs, Chairmen and Vice-Chairmen of various Boards and Corporations were also present on the occasion and watched the live address of the Prime Minister from Indira Gandhi Stadium New Delhi.
To mark the launch of the Fit India movement program was organized in the conference hall of the H.P. Secretariat. In which Additional Secretary (GAD) Manoj Tomar, Director-cum-Special Secretary (Revenue & DM) Duni Chand Rana and Director Public Finance & Public Enterprises-cum-Special Secretary (Finance) Rajesh Sharma along-with staff of Secretariat witnessed this launch.
Similar programs were organized at the District level throughout the State as well.