Cabinet Meeting:Patwari training will be given to 1195 candidates; Important decisions in health and education sector, doors of employment opened in various departments 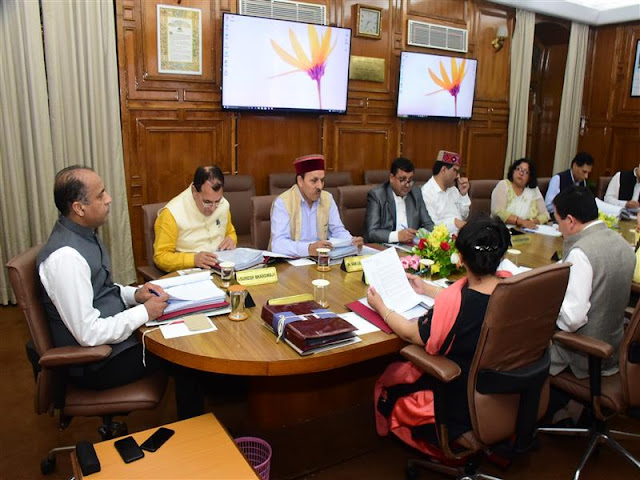 Financial assistance increased for indigent and widows:
The State Cabinet in its meeting held here today under the Chairmanship of Chief Minister Jai Ram Thakur decided to increase financial assistance to the eligible destitute women and widows under Mother Teresa Matri Asahay Sambal Yojna from existing Rs. 5000 to Rs. 6000 per child per annum subject to a maximum of two children for their proper upbringing.

Cabinet gave its nod to selection and imparting patawari training of 1195 candidates
The Cabinet gave its approval for selection and imparting patwari training to 1195 candidates (933 candidates in Mohal side and 262 candidates in Settlement side) and 17 eligible chainmen of settlement department Shimla and Kangra to fill up vacancies in next five years. It also gave its nod to establish a 'Disability Cell' in the Directorate of Scheduled Castes, Other Backward Classes, Minorities, and Empowerment of Specially Abled Persons Department for the empowerment of persons with special abilities along with filling up of requisite posts to man the Cell.

Cabinet approves 7 posts in Bal Ashram
The Cabinet decided to fill up seven posts of different categories in Bal Ashrams being run by Himachal Pradesh Child Welfare Council at Sunni, Kalehali, and Kalpa for their smooth functioning.

Sub Employment office to be opened in Mandi:

It also gave its nod to open Sub Employment Office at Bali Chowki in Mandi district along with creation and filling up of requisite posts.

Cabinet approves 17 posts in the newly opened fire post in Mandi Ditt.
The Cabinet also decided to create and fill up 17 posts of different categories and provide two new vehicles for the newly opened Fire Post at Padhar in Mandi district for its smooth functioning.It also gave its consent to open Fire Sub Station at Gohar in Mandi district along with creation and filling up of 23 posts of various categories and three vehicles.

wages increased for police officers in bordering areas:
The Cabinet decided to increase the honorarium of Special Police Officers deployed in those areas of Chamba and Lahaul-Spiti districts bordering Jammu and Kashmir from existing Rs. 6000 to Rs. 7000 per month.

Right to free education to children to be implemented:
The Cabinet accorded its consent to implement "The Right of Children to Free and Compulsory Education (Amendment) Act, 2019 regarding conducting 5th  and 8th class examination  for which questions papers and answer sheets will be provided by Himachal Pradesh Board of School Education Dharamshala and conduction of examination and evaluation will be accomplished under the supervision of Deputy Director, Elementary Education of the concerned district
t decided to start Post Graduate classes in History and Political Science in Government Degree College, Shillai in Sirmaur district from the academic session 2019-20.
In order to prepare schools for emergencies and ensure that they are resilient to face disasters and to sensitize school children and school community on disasters preparedness and safety measures, the Cabinet gave its approval for School Safety Project Guidelines for implementation to reduce disaster risk in schools of the State.
The Cabinet decided to continue implementation of Mukhya Mantri Khet Sanrakshan Yojna in 2019-20 also and provide 50 percent subsidy on barbed wire and chain link and 70 percent subsidy on composite fencing to save the crops of the farmers from wild and stray animals.

Cabinet approved to amend ClassIII and IV recruitment and promotion rule:
The Cabinet approved to amend the Recruitment and Promotion Rules of various categories Class III and Class-IV posts by making the passing of Matric and plus two examinations from schools situated in Himachal Pradesh mandatory for being eligible for class-III posts and passing of 8th or 10th from schools from Himachal Pradesh for class-IV posts. These conditions will not be applicable to bonafide Himachalis as defined by the State Government from time to time.

13 emergency vehicles to be provided in each police distt.
Keeping in view the difficult and tough topography of the State, the Cabinet gave its nod to strengthen the Emergency Response and Support System by providing 13 Bolero vehicles one each in every police district of the State to be used as an Emergency Response Vehicle in emergent situations. These vehicles would be equipped with Mobile Data Terminals which would be linked with Public Safety Answering Point.

It decided to create a separate department of Gastroenterology and Hepatology in Dr. Rajendra Prasad Medical College, Tanda and create one post each of Professor and Associate Professor and two posts of Assistant Professor. It also decided to create two posts of Assistant Professors in Super Specialty Cell of Paediatric  Clinical Immunology and Rheumatology in Paediatric Department of Dr. Rajendra Prasad Medical College, Tanda.
It also gave its nod to continue the services of already engaged SMC teachers on period basis in Elementary/Higher Education Department for academic session 2019-20.
It gave its approval to upgrade Sub Tehsil Dheera in Kangra district to Tehsil status.

Age limit under Mukhyamantri swalamban yojna increased from 35 to 45:
The Cabinet gave its consent to increase the upper age limit for availing the benefits of newly launched 'Mukhya Mantri Swablamban Yojna- 2019 from 35 years to 45 years so as to cover more people under this scheme which has been framed by merger of Mukhya Mantri Yuva Ajivika Yojna and Mukhya Mantri Swablamban Yojna-2018.
The Cabinet decided to create Sub Division (Civil) Pachhad at Sarahan in Sirmaur district.
It gave its nod to establish Civil Court at Thunag in Mandi district alongwith creation of requisite posts to manage this Court.
The Cabinet decided to create and fill up 29 posts of different categories in Directorate of Energy through direct recruitment.