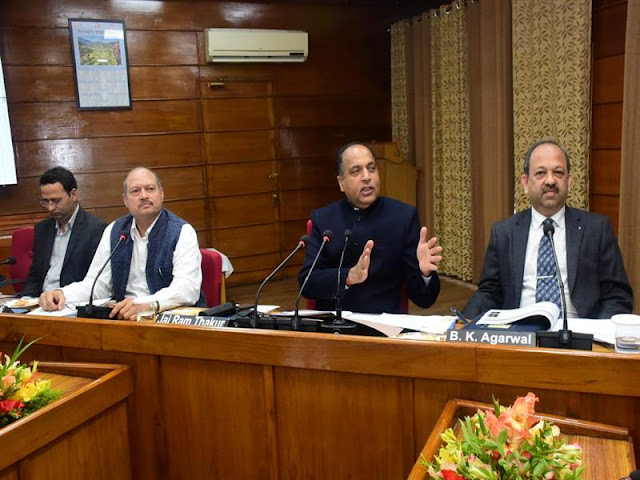 All Projects to be completed within time Frame
Chief Minister Jai Ram Thakur Ji directed the officers of the state government to adopt a proactive approach towards effective implementation of the developmental schemes so that the fixed targets could be achieved in a stipulated time period. He was presiding over the first meeting of   “Him Vikas Samiksha" meeting, held here today.

The Chief Minister said that the Him Vikas Samiksha is the unique initiative of the state government which aims at constant reviewing of the progress of the ongoing developmental projects besides expediting the pace of development. He said that 103 Key Performance Indicators (KPI) have been set for 21 departments of the state besides four common KPIs for 26 departments. This is a holistic program to review the working of the government departments as a whole instead of individual departmental reviews. Online reporting is being done in place of the manual reporting for accelerating the pace development, he added.

Forest clearance to be expedited
Jai Ram Thakur Ji directed Public Works department to develop work management and information system so that all the works of the department could be displayed online. He said that special stress should be laid on expediting the cases of Forest Rights Act (FRA) and Forest Conservation Act (FCA) so that the developmental projects do not suffer due to the want of forest clearances. Apart from ensuring the time-bound completion of projects, major stress must be laid on quality construction.

Safe drinking water to be provided to each household
The Chief Minister said that Himachal Pradesh is the second state after Sikkim in respect of providing piped drinking water to households. The Irrigation and Public Health department must ensure that safe drinking water be supplied to the people particularly in the rural areas in order to avoid the spread of water-borne diseases. He also felt the need to provide irrigation facilities to maximum farmlands which would not only motivate the farmers to go for the cultivation of alternative cash crops but also help in doubling the farm income by the next three years.
While expressing concern over no visible major change in farming pattern despite the completion of several major irrigation projects, the Chief Minister said that farmers should be motivated to going for the cultivation of cash crops to make them economically viable.

Skill development to be  enhanced
The Chief Minister said that endeavors should be aimed at providing vocational and job oriented education so that the youth get ample opportunities of employment and self-employment. He said that the increase in learning outcome must be ensured so that the State could lead the country in field of education. He said that despite being a small state, Himachal Pradesh has done commendable work in the education sector and the government is spending about 20 per cent of the state budget on this vital sector

He said that being a welfare state, efforts must be made on ensuring social justice to all. He said that over 5,34,000 people are being provided social security pension in the state with almost no pendency. He emphasized that special information, education and communication (IEC) campaigns must be launched in order to ensure effective implementation of various ICDS. Health, nutrition and anemia are the major areas of concern where the department must give added thrust to get desired results, he added.

Health Schemes proving to be a boon
Jai Ram Thakur ji said that Himcare and Ayushman Bharat scheme are proving boon to the people of the state in providing treatment to the patients of poor and needy families. He directed to improve numbers of institutional deliveries besides mitigating the infant mortality rate in the state.
Chief Secretary B.K. Agarwal assured the Chief Minister that every effort would be made to come up to the expectations and aspirations of the people of the state as well as the government.
Additional Chief Secretary-cum-Principal Secretary to Chief Minister Dr. Shrikant Baldi conducted the proceedings of the meeting and apprised about various targets in different components under different departments.