CM holds meeting with Mahindra, Godrej and Tata Group in Mumbai Invited to invest in tourism and automobile and various other sectors in Himachal

Today, under the leadership of Chief Minister Jai Ram Thakur, a high-level delegation met in Mumbai today with Anand Mahindra, Chairman of Mahindra Group, and discussed with them about the possibilities of investment in different areas of the state. The Chief Minister urged  Mr.Mahindra to consider special investment in tourism automobile and information technology, etc. Mr. Mahindra, expressing his deep interest in investment in sectors like tourism, real estate, praised the 'new roads, new floors' scheme started by the Chief Minister and also showed interest in the partnership in this scheme. He said that Mahindra Group is going to invest 200 crores for the expansion of the Green Field Project so that more than 200 people will get employment.
Industry Minister Brickam Singh appreciated Mahindra Group's efforts for a waste-making project and asked them to bring such projects as pilot projects in cities like Shimla and Dharamsala. Mahindra Group also said that this group is exploring the potential of running electricity under Smart Citi projects in Himachal Pradesh and becoming a participant in the Intelligent Traffic System. During the meeting, Mahindra Group expressed an interest in investing in Himachal, showing interest in generating energy from the garbage because there are immense possibilities of converting "pine cones and leaves" into energy. 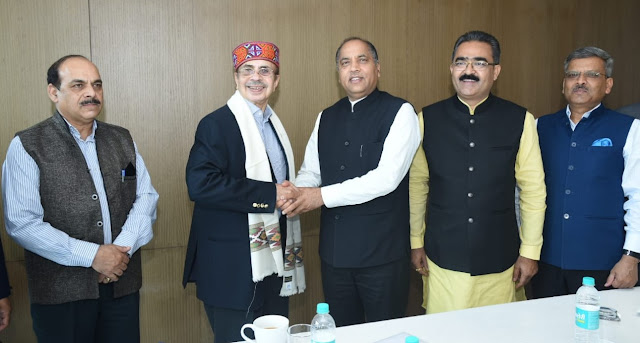 After this, the Chief Minister and the members of the delegation met Godrej Group Chairman Adi Godrej and requested them to increase their presence in the FMCG and real estate sector in the state. He conveyed to Mr. Godrej that the State Government has created an encouraging and promising environment for the development of the industry. He also urged that the state should be considered to set up 'toolroom' because his company has expertise in this field. He also invited the Chairman of Godrej Group for the Global Invested Meet, organized in Dharamsala in November. The Chairman of Godrej Group informed the delegation that he would send a suitable note about all his businesses and explore investment opportunities in the state. 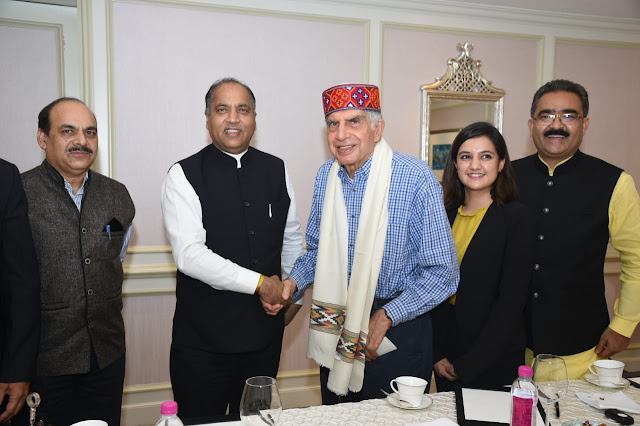 Sh Jai Ram Thakur, Hon'ble Chief Minister and Sh Bikram Singh, Hon'ble Industry Minister of Himachal Pradesh called on Mr Ratan Tata as part of the outreach activity for attracting investments to the State. Hon'ble CM requested Mr Tata to consider exploring investment avenues particularly in the areas of Tourism, IT, Electric Vehicle Manufacturing, etc. Mr Tata assured that he will ask Chairman of Tata Sons to constitute a joint taskforce with the Govt of Himachal Pradesh to explore the investment possibilities before the main event that is scheduled for the month of November this year. He also assured that Tata Sons will definitely consider investing in some of the mutually beneficial sectors. Mr Tata also enquired about the priority sectors of the State to which Hon'ble CM responded that his Government is focusing on clean and green industry.